The 2014 Stella Count is the most comprehensive survey of Australian reviewing yet. The data shows the ratio of books by men and women reviewed in 12 major Australian review publications, including national and state newspapers and influential magazines and review journals. This information was compiled by the Stella Prize in conjunction with Books+Publishing, with assistance from researchers at Deakin University, as well as Dr Julieanne Lamond at ANU and Dr Melinda Harvey at Monash University.

As in previous years, the 2014 Stella Count has collected information on the gender of authors reviewed and the gender of reviewers. This year, however, the scope of the data collected was also expanded substantially to include the size of reviews and the genres most frequently reviewed (fiction, nonfiction, poetry and children’s books).

The result has been a more nuanced data set that has enabled us to identify patterns regarding what sorts of books by male and female authors are more frequently reviewed at each publication.

The Saturday review sections of The Age and Sydney Morning Herald, which are syndicated across the two newspapers, reviewed 60% books by men and 40% books by women.

The Monthly and Australian Book Review both fell further from gender parity than their results in last year’s Stella Count, each reviewing 62% male authors in 2014.

Books+Publishing was the only publication researched that had a significant majority of reviews of books by female authors, with 36% male authors and 64% female authors.

Click on pie to view full data set for that publication. 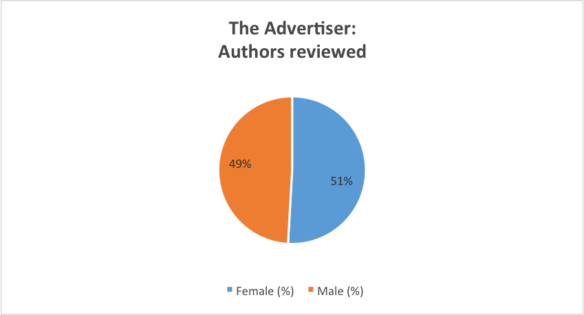 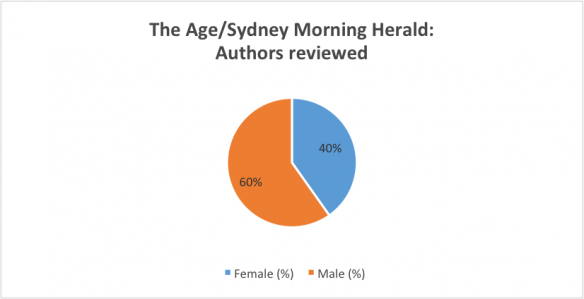 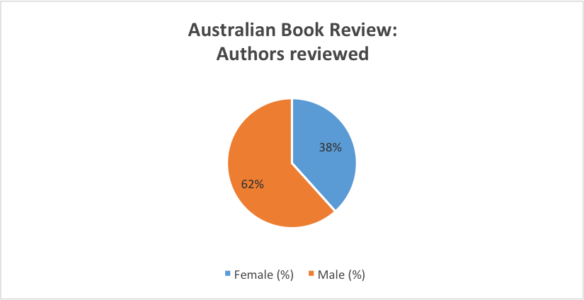 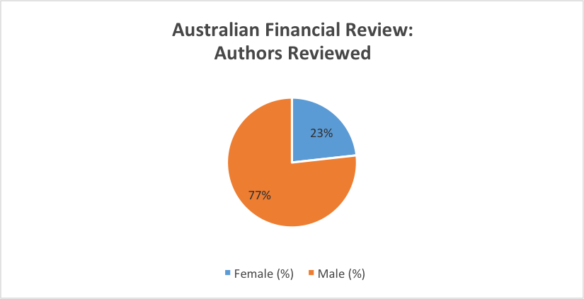 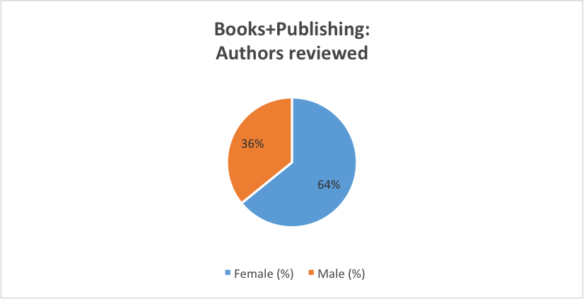 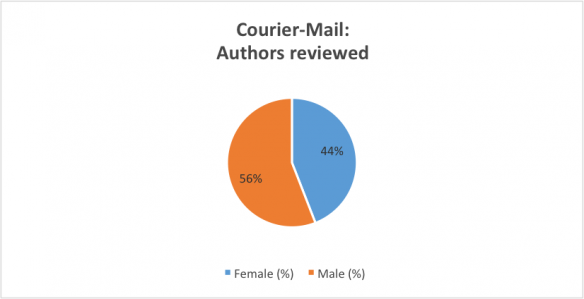 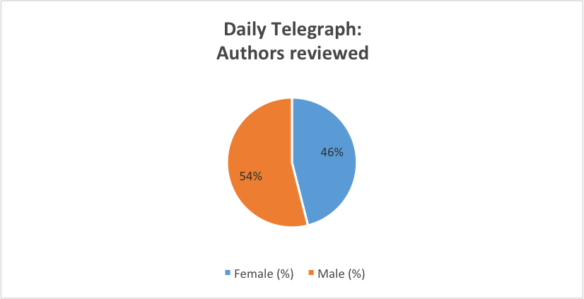 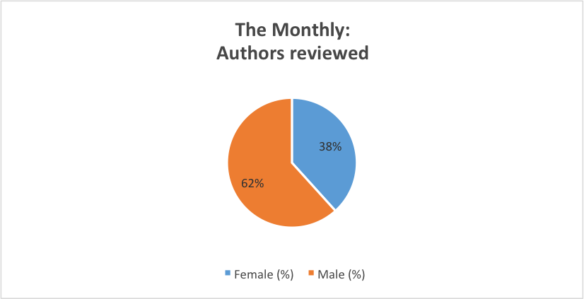 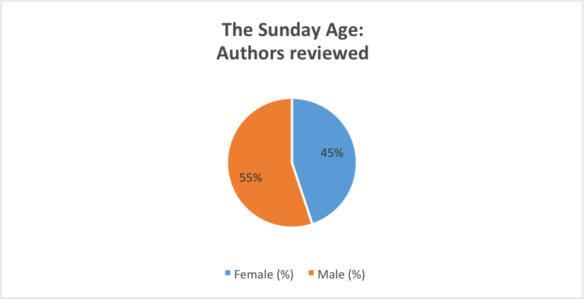 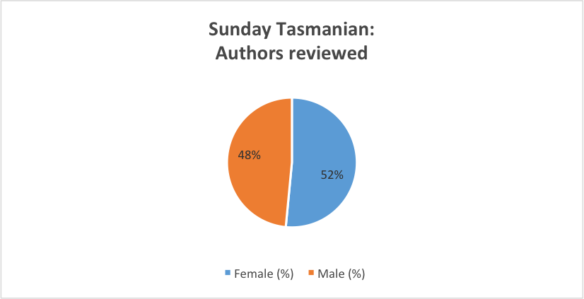 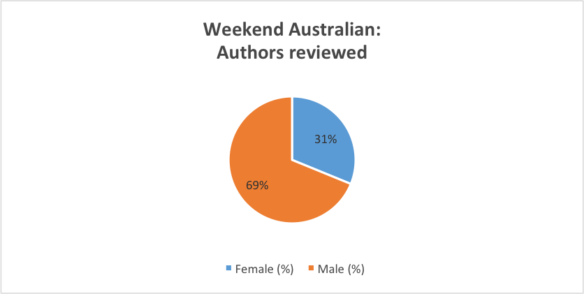 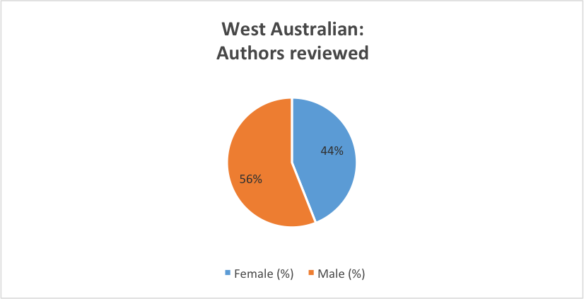 The Gentlemen’s Club: Reviewer Gender and Its Effects

As in the 2013 Stella Count, this year’s data showed that, in the vast majority of publications, books by male authors were more often reviewed by men. This was not only in the case of men; a pattern was observed, in which each gender more frequently reviewed authors of the same gender. Conversely, the proportion of reviews by men of female authors was less than 17% across all 12 publications surveyed, regardless of how evenly authors of both genders were reviewed overall.

These statistics point to a trend of proportionally fewer nonfiction works by women being reviewed at most publications.

For the first time in its three-year history, the 2014 Stella Count has compiled data on the approximate size of each review, classifying them as small (capsule reviews under 200 words), medium (300–900 words), or large (longer-form reviews of over 1000 words).

This has revealed which size of review is most often assigned to which author gender by each publication. While some publications (notably the Daily Telegraph, the Advertiser, and the Sunday Tasmanian) had relatively equitable results, most others appeared to favour medium and large reviews of books by men over those of books by women.

For instance, Australian Book Review reviewed 62% male authors and 38% female. Despite the ratio favouring males overall, their small reviews were almost equally distributed among books by male (11%) and female (12%) authors, and books by men only slightly outperformed those by women in medium-sized reviews (26% and 19% respectively). However, in large reviews (and, hence, those generally afforded greater prominence) the gender disparity was far more marked: just 7% of the total were large reviews of books by women; while 25% were large reviews of books by men.

Changes over Time: Observations and Speculations 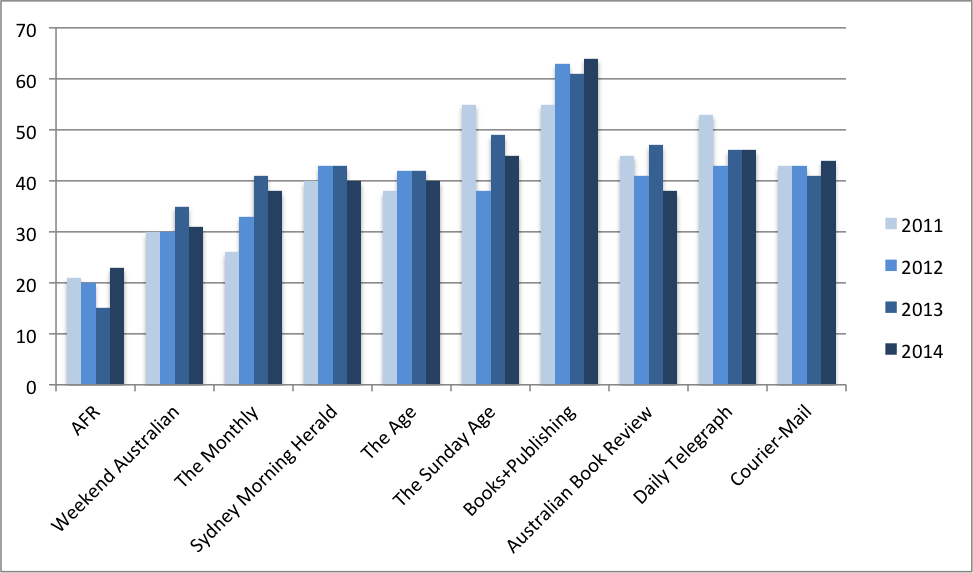 Percentage of each publication’s reviews that were of books by women.

Many publications had a slightly more pronounced gender disparity than was shown in the 2013 Stella Count, dropping several percentage points lower in their coverage of women authors in 2014. These included the Weekend Australian, the Sydney Morning Herald and The Age, The Sunday Age, The Monthly and Australian Book Review.

The scope of this study is not to speculate on what has caused these fluctuations. However, the 2014 Stella Count does show the ways books by men and women are often treated differently when several factors are taken into account – the gender of the reviewer, the size of review and the genre of the book reviewed – all of which are cause for concern.

A book of nonfiction by a woman has half the chance of being reviewed by The Age or SMH than one by a man. Perhaps this is because women are publishing fewer books of nonfiction, or perhaps those they do publish are less likely to engage with topics that are considered for review. We do know that gendered reading habits, established early in life, can become entrenched and lead to the kind of unconscious bias that may disincline a male reviewer to choose a book by a female author, or cause an editor to commission a male reviewer over a female reviewer for a certain book.

Full data for every publication surveyed is available by clicking through to individual pages via the pie charts above. The 2014 Stella Count analysis is intended to generate conversation and draw attention to areas of Australian literary reviewing where a lack of gender diversity and equitable representation is demonstrated by publications in some aspect of their reviewing. Many media outlets are publishing a commendable and wide variety of reviews, and contributing positively to the ongoing development of a rich and diverse Australian critical culture.

The Future of the Stella Count

We intend to expand the Stella Count still further in 2015, and to broaden our scope to collect data about race, disability, non-binary gender identification, and sexual orientation. It is our hope that this will enable us to accurately identify the extent to which these elements affect the review coverage received by authors from different backgrounds, particularly marginalised groups.

Notes on the data:

Books with two authors or an author and illustrator of the same gender were included in this Count and logged under their shared gender.

Anthologies and other books with both male and female authors or more than two authors were excluded from this Count. In all cases they made up less than 1% of the total data.

Every effort has been made to ensure these statistics are accurate, and any publication for which we were unable to obtain sufficient or reliable data has been excluded from the Count. This Count surveyed print publications only.

This information was compiled by the Stella Prize in conjunction with Books+Publishing, with assistance from researchers at Deakin University, as well as Dr Julieanne Lamond at ANU and Dr Melinda Harvey at Monash University.

The Stella Count was made possible in part thanks to financial support from the Copyright Agency Cultural Fund.

Huge thanks to our tireless and thorough 2014 Stella Counters:

The analysis of the 2014 Stella Count was compiled by Veronica Sullivan, Stella Prize Manager.