The 2016 Stella Count surveys twelve publications – including national, metropolitan and regional newspapers, journals and magazines – in print and online. The Count assesses the extent of gender biases in the field of book reviewing in Australia. In order to do this, it records the authors, book titles and book genres reviewed, as well as the gender of reviewers, and number and size of reviews published.

Below you can read an analysis of notable points of interest from the results. Scroll to the bottom of the page to find the results for each publication. 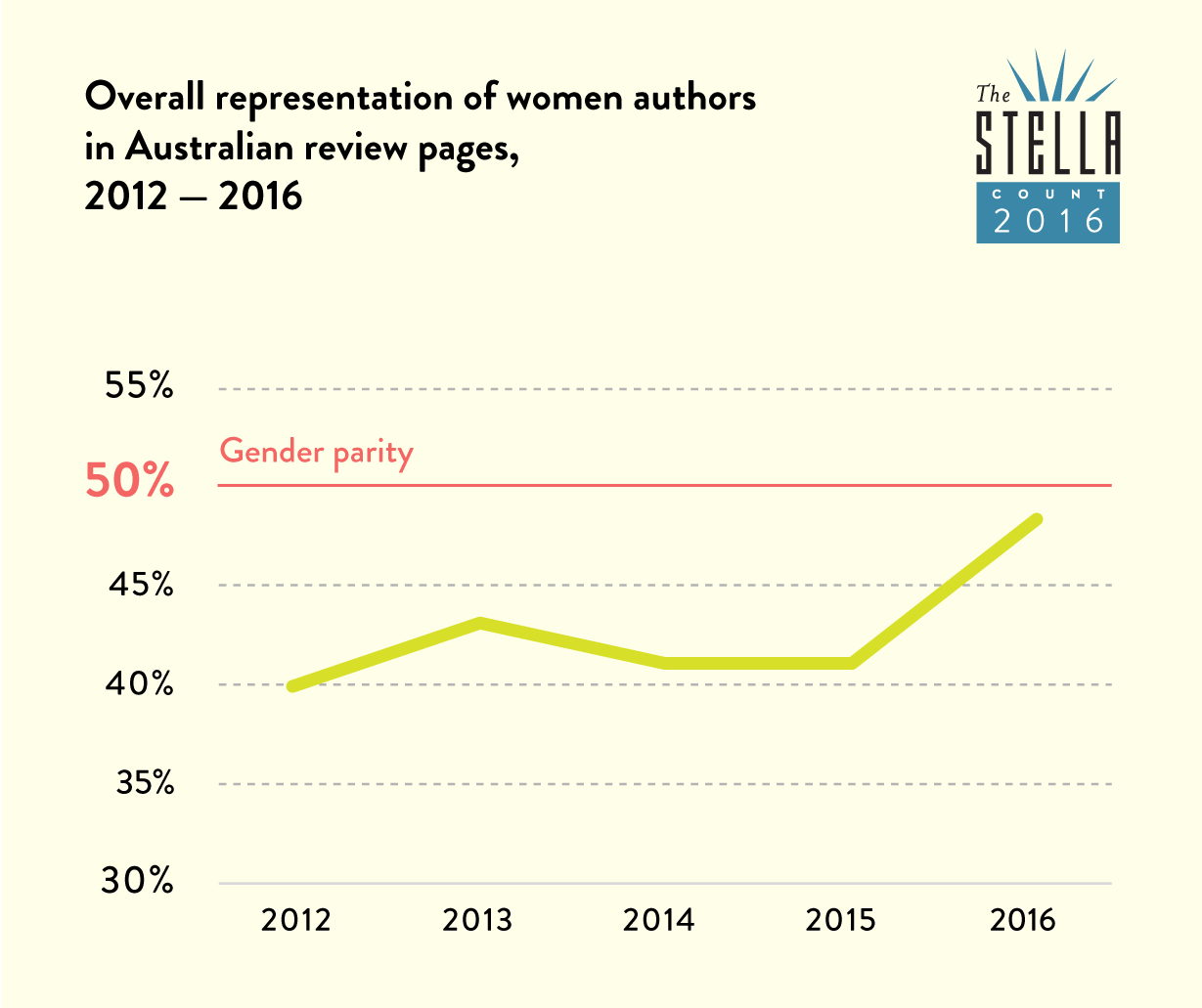 “In a first, all twelve of the publications surveyed in the 2016 Count either increased or maintained the percentage of women authors they reviewed compared to the previous year.”

Stella has now been collecting review data annually for five years, and the 2016 Stella Count is the first in which women authors have achieved near-parity in the reviews pages. In the inaugural Stella Count of 2012, 40% of books reviewed in all publications surveyed were written by women. Since then, the figure has hovered between 41% (in 2014 and 2015) and 43% (in 2013). In 2016’s Count, the percentage increased to 48%. Some publications have significantly improved the representation of books by women authors in their reviews over the five years of the Count: the Weekend Australian (from 30% in 2012 to 42% in 2016), Australian Financial Review (from 20% to 45%), and The Monthly (from 33% to 54%).

In another first, all twelve of the publications surveyed in the 2016 Count either increased or maintained the percentage of women authors they reviewed compared to the previous year. Individual publications showed much improvement in the percentage of women authors reviewed, compared to their 2015 results: up 28% at the Australian Financial Review, 19% at The Monthly, 15% at the Mercury, 11% at the Courier-Mail and the Sydney Review of Books, and 10% at the Advertiser. This would appear to constitute a clear shift in the book-reviewing landscape. In 2015, only one publication, Books + Publishing, reviewed more books by women than books by men. In 2016, four publications did so (The Monthly, Mercury, Advertiser and Books + Publishing) and a further three were either at or near parity (Age/Sydney Morning Herald[1] , West Australian, Courier-Mail).

The chart below shows the total percentage of books written by women that have been reviewed across twelve publications, tracked over the past five years. 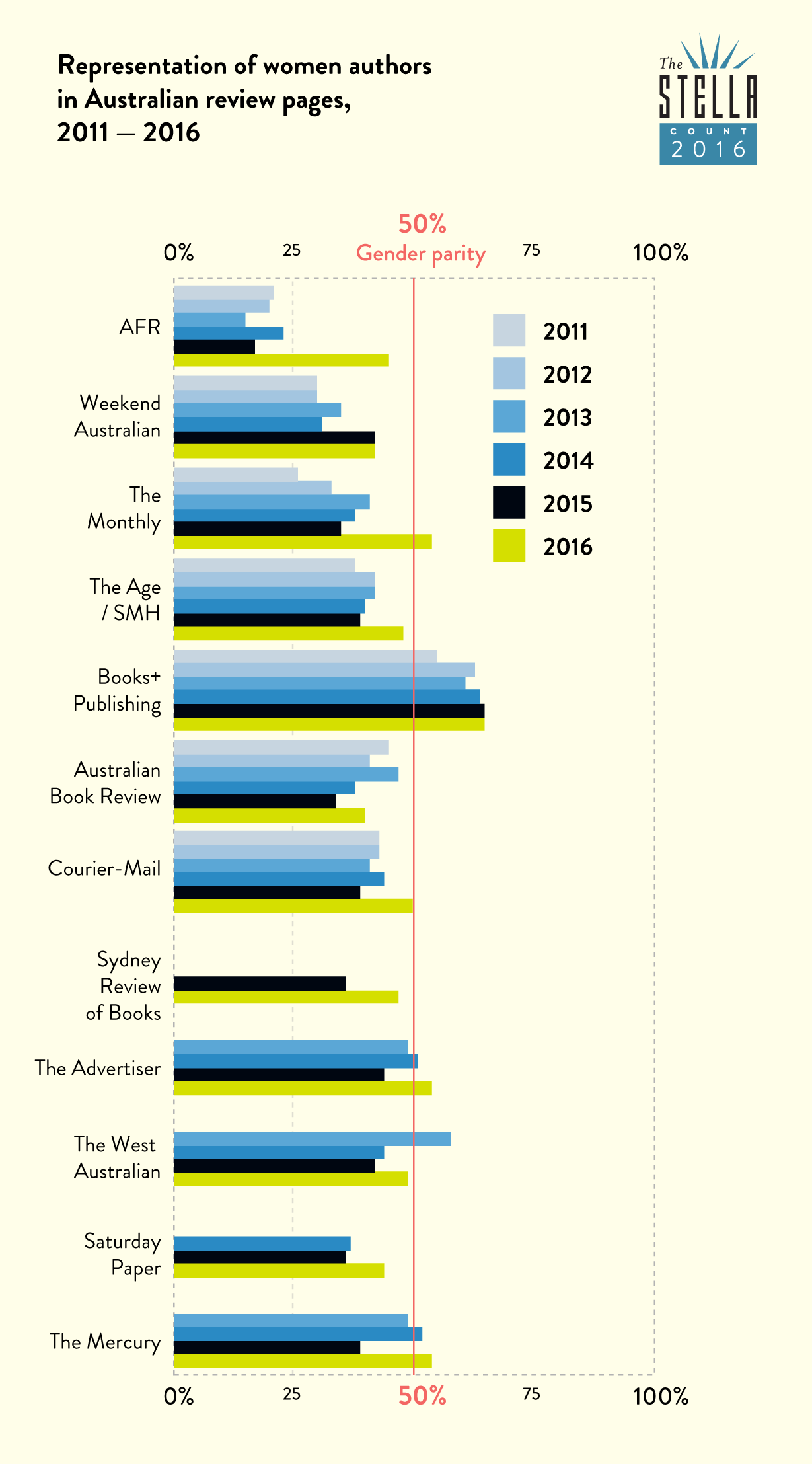 Australian Book Review, which increased its representation of women authors by 6% since 2015, still had the most marked gender disparity in terms of authors reviewed in 2016. The Australian Book Review is also one of only two publications – the other is the West Australian – where things have gone backwards in terms of the gender parity of authors reviewed over the five years of the Stella Count.

Despite significant improvements towards gender parity, questions of scale and reach do need to be taken into consideration. The three publications that published the highest volume of reviews in 2016 (i.e. more than half of all 2889 books reviewed in the Count) were the Age/SMH (699), the Weekend Australian (584) and Australian Book Review (346), and they all reviewed more books by men than by women. Two of these three publications, arguably, have the furthest reach and largest circulations and readerships: the Weekend Australian is a national publication, and the Age and Sydney Morning Herald are published in Australia’s two largest metropolitan markets, with their review sections syndicated across Fairfax’s rural, regional and local papers.

Across all publications that were counted in 2016, 52% of book reviews were written by women, which is the same ratio as in 2015. Women reviewed more books than men in eight of the twelve publications. The exceptions to this were the Weekend Australian (32% of book reviews were written by women), Australian Book Review (38%), the Age/SMH (46%) and the Sydney Review of Books (44%). (It should be noted that these four publications hold 59% of the total reviewing field.) Moreover, of the seventeen reviewers who reviewed ten or more books at the Weekend Australian in 2016, only four (or 24%) were women.

Across all publications in 2016, books by men were more likely to be reviewed by men, and books by women more likely to be reviewed by women. Author gender matched reviewer gender for 66% of all books reviewed in 2016. This differs from what was observed in the 2014 and 2015 Stella Counts, in which men’s books were reviewed by both men and women, and women’s books were reviewed mostly by women. In 2016, men reviewed significantly more books by women than in previous years. In 2015, men were reviewing between 4–15% of books by women across most publications; in 2016 the range was between 5% (Advertiser) and 22% (Australian). This shift at the upper end of the spectrum is, in part, an effect of the increase in the number of books by women reviewed across the publications, though the gender of reviewers has stayed largely the same. Nonetheless, the pairing of books with reviewers in Australia continues to be strongly split along gender lines.

“Gains in the reviewing of books by women have been made mainly in relation to small- and medium-length reviews.”

While we saw real improvement in the reviewing of women’s books in the 2016 Stella Count, there remains a significant disparity when it comes to the size of reviews. With large reviews (i.e. a review of more than 1000 words), men still dominated as both authors and reviewers. Of all the large reviews published in 2016, 59% were of books by men and 65% were by male reviewers. While with regard to medium-length review coverage (i.e. reviews between 300–1000 words), books by women and men were reviewed almost equally (53% men, 47% women), male reviewers wrote the bulk of those reviews (74%). These statistics are significant given the increasing number of books by women being reviewed, and the continuing dominance of female reviewers across the board. While small reviews (i.e. reviews under 300 words) were accorded evenly to male and female authors, 61% were written by women reviewers. Gains in the reviewing of books by women, therefore, have been made mainly in relation to small- and medium-length reviews.

“Of all the titles reviewed in 2016, nonfiction books by men were reviewed more often than any other gender/genre combination – at 28% of the total reviews.”

As in the previous two years of the Stella Count, when it came to genre the 2016 Count showed a stark divide between gender of both author and reviewer. Nonfiction still seems to be a male domain, and fiction a female one.

For the first time, the Stella Count has tracked the gender balance of the contemporary Australian literary field more broadly. For publications that publish regular non-review literary content, it separately counted general reporting on books, including feature articles, author profiles, columns and interviews. While over the five years of the Stella Count a steady decline in the overall number of reviews published each year has been observed, there has been an upturn in book-related coverage such as feature articles, author profiles and interviews in some publications. In the pages of newspapers and journals surveyed in 2016, there were almost as many pieces of book-related coverage as there were books reviewed.

“The Monthly’s book-related essays were dominated by coverage of male authors (75%).”

Male authors received more non-review coverage on average across the publications: 54% of book-related pieces discussed male authors, while 46% discussed female authors. The metropolitan newspapers published a higher percentage of book-related pieces on female authors than male authors: the West Australian (62% women; 38% men), the Mercury (62% women; 38% men), the Courier-Mail (61% women; 39% men) and the Advertiser (54% women; 46% men). The Age/Sydney Morning Herald published more book-related coverage than any other publication, representing 39% of the field, and was almost at parity in terms of the gender of authors discussed (52% men; 48% women).

“The Saturday Paper and Weekend Australian magazine had the most acute disparity, with women writers accounting for only 35% and 37% of these publications’ total number of bylines respectively.”

For the first time, the 2016 Stella Count surveyed writer bylines cover-to-cover for six leading magazines and journals, tracking not only book-related content but all articles published. The publications included in this aspect of the Count were: Good Weekend, Meanjin, The Monthly, Overland, The Saturday Paper and the Weekend Australian magazine. The results show what is now a very familiar breakdown, averaging 61% male and 39% female writers across the surveyed publications.

The Saturday Paper and the Weekend Australian magazine had the most acute disparity, with women writers accounting for only 35% and 37% of these publications’ total number of bylines respectively. The situation was even more extreme when length was taken into account: large articles by men constituted 44% of articles published in The Saturday Paper, while large articles by women made up only 25% of the whole. Over at the Weekend Australian magazine the divergence for medium-length articles was even greater: medium-length articles by male writers accounted for 40% of the total bylines compared with 23% for women writers. At Meanjin, 58% of writer bylines belonged to men and 42% belonged to women. At Overland, the figures were 45% male and 55% female.

Book reviewing in the broadcast media

The 2016 Stella Count also expanded to record instances of book reviewing and discussion in Australian broadcast media. This data had a very small sample size but, of the three programs counted, all reviewed more books by men than by women: 56% of reviews at ABC Melbourne’s ‘Reading with Raf’ were of books by men; 64% at ABC TV’s ‘The Book Club’, and 73% on Radio National’s ‘African Book Club’.

Click on the images below to view the full results and charts for each publication’s data. 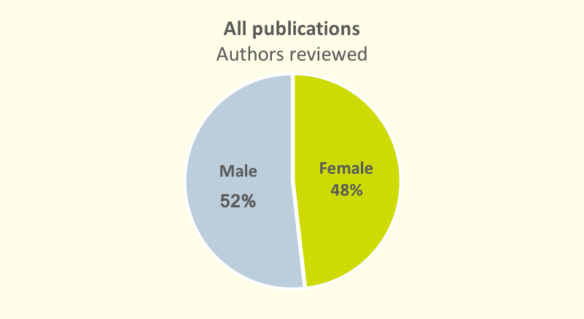 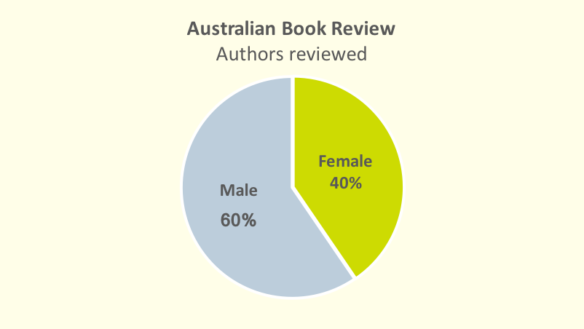 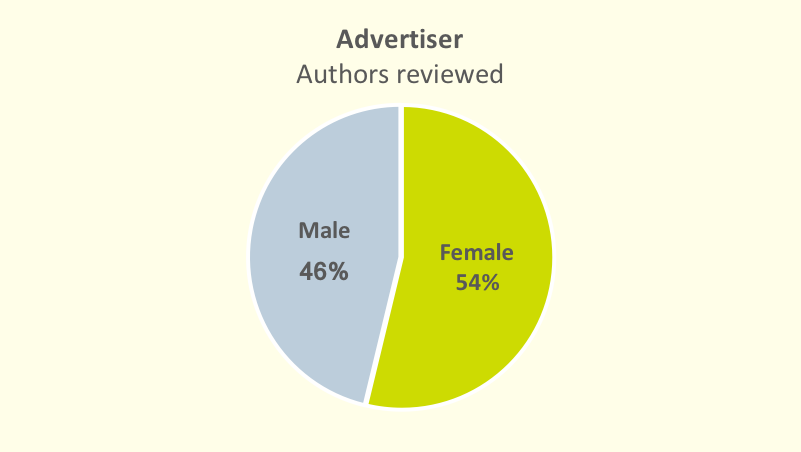 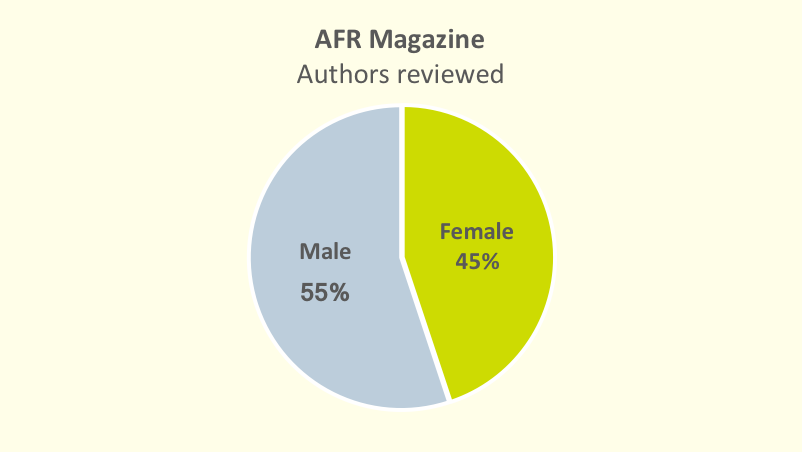 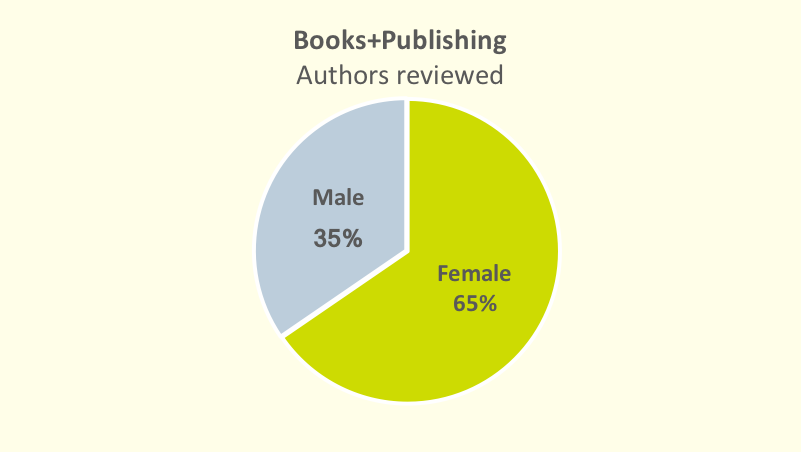 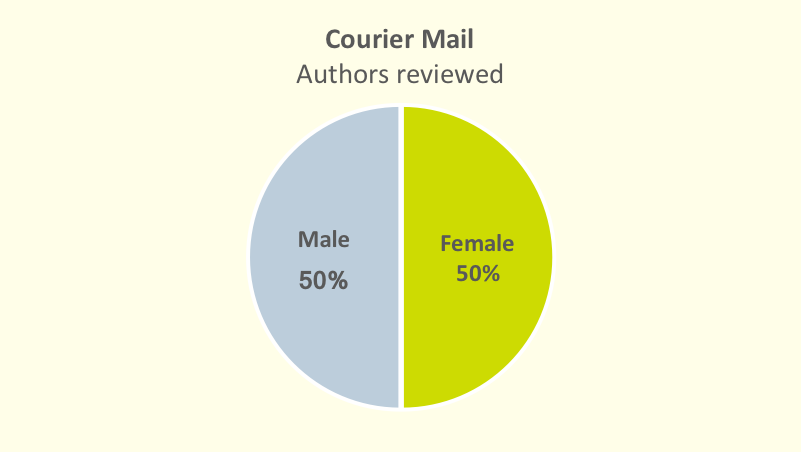 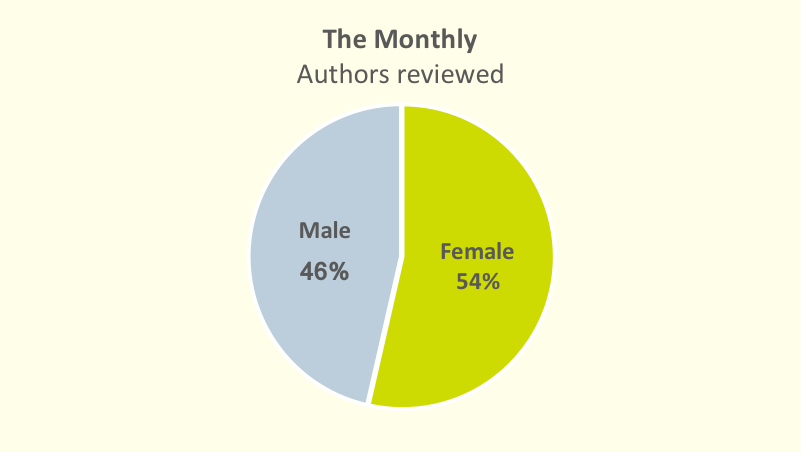 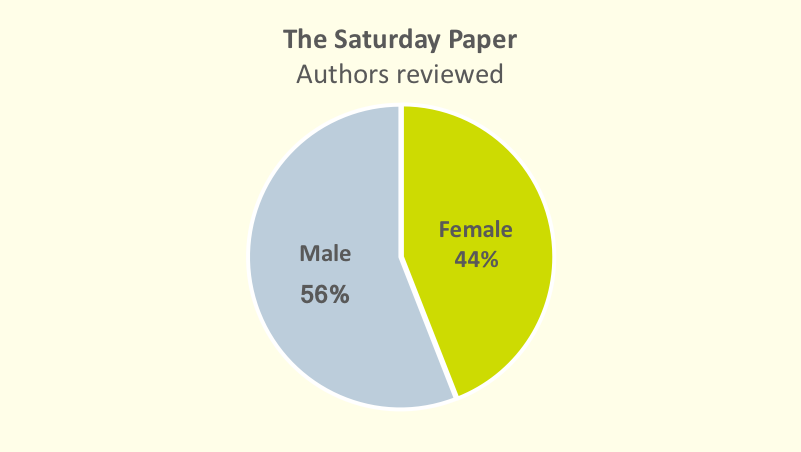 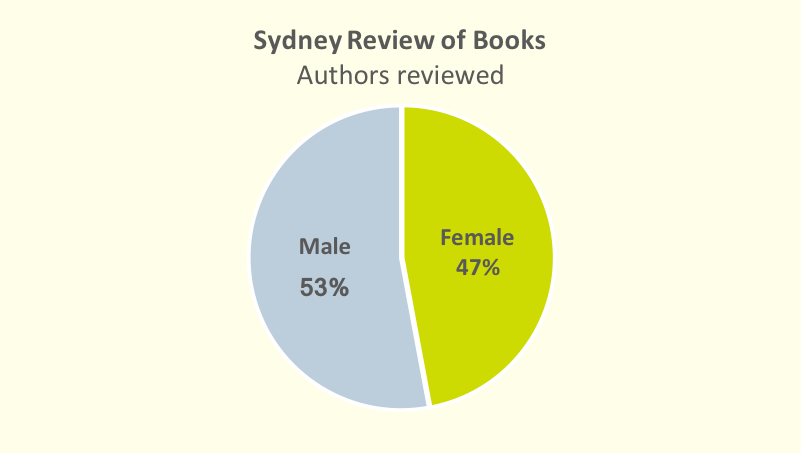 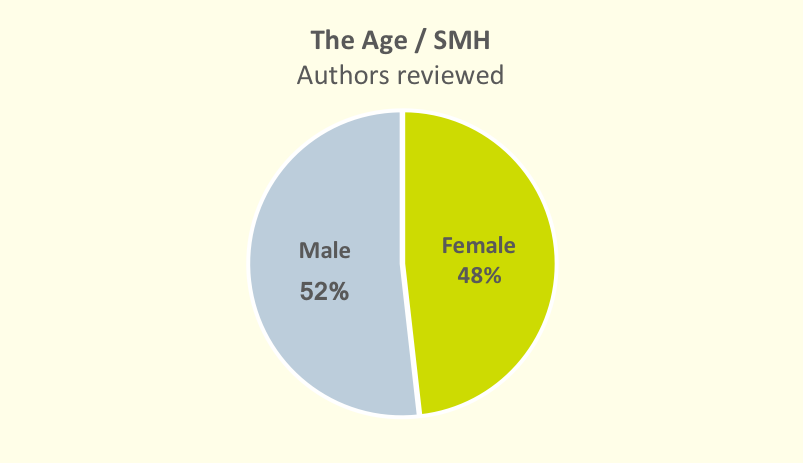 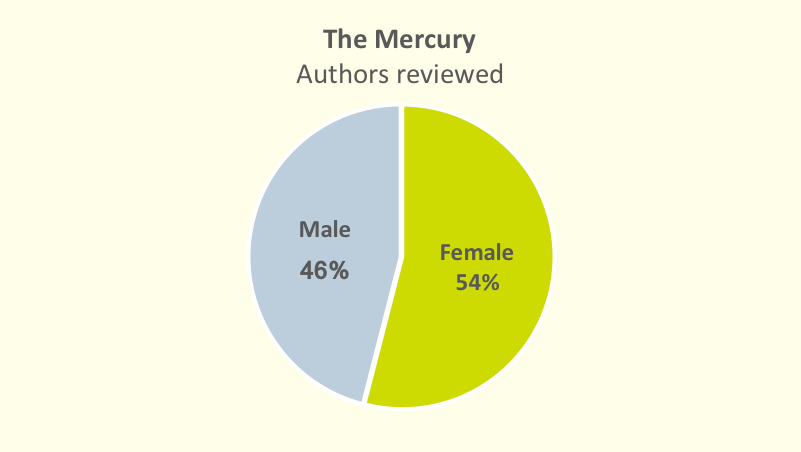 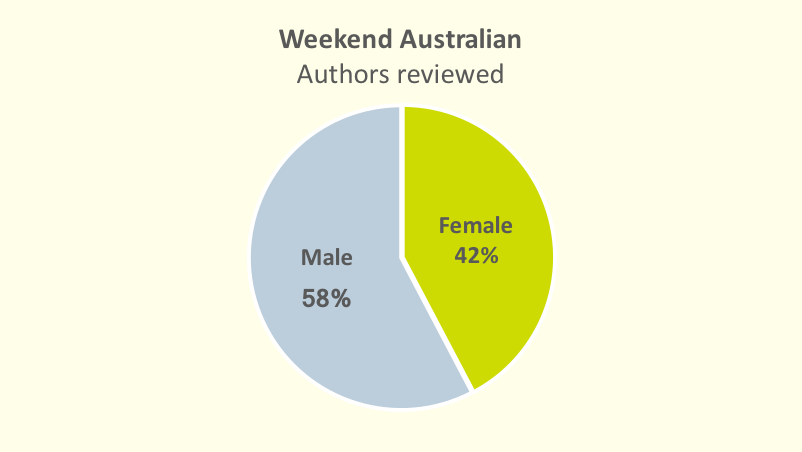 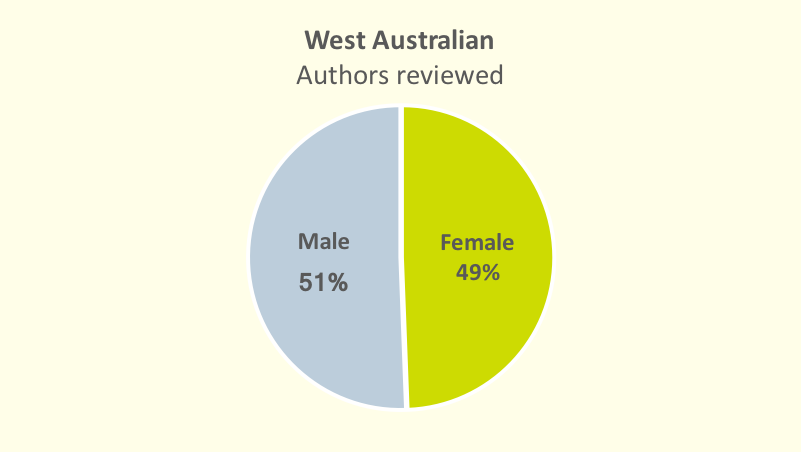 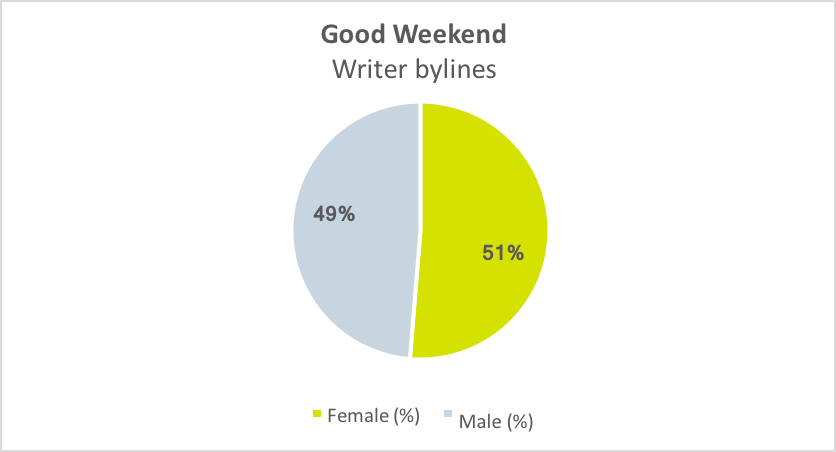 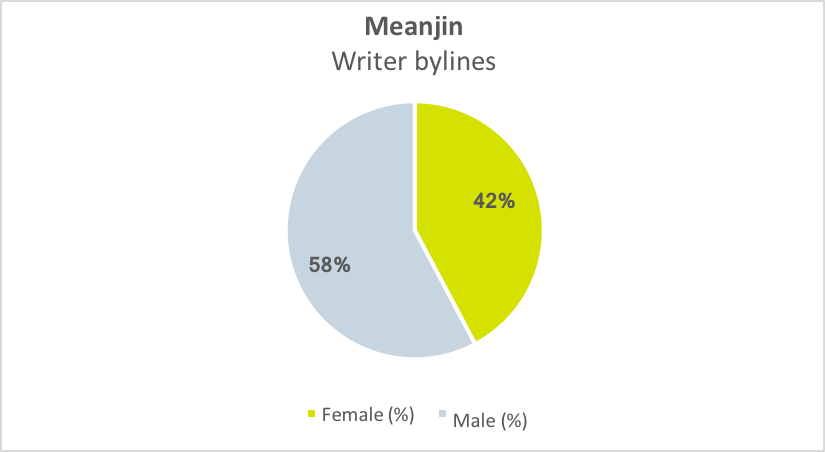 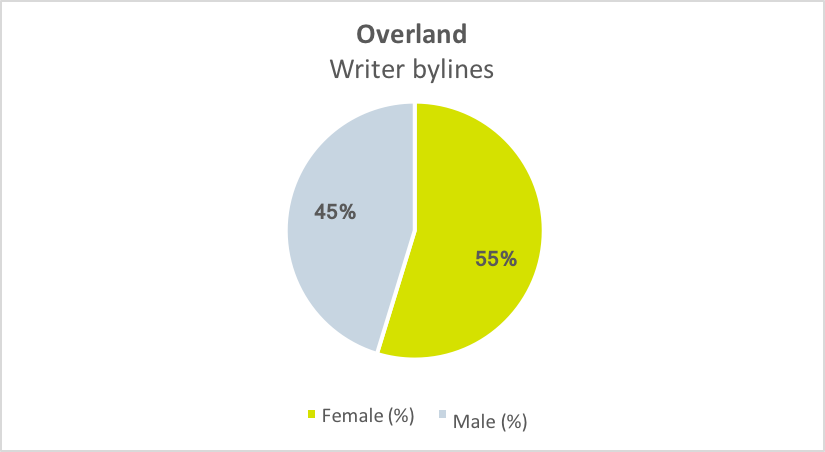 Notes on the data

Books with two or more authors or authors and illustrators of the same gender were included in this Count and logged under their shared gender. Anthologies and other books with both male and female authors or more than two authors were excluded from this Count. In all cases they made up less than 1% of the total data.

Every effort has been made to ensure these statistics are accurate, and any publication for which we were unable to obtain sufficient or reliable data has been excluded from the Count.

The Stella Prize wishes to thank the entire team at Isentia, in particular Khali Sakkas, Peter Hannagan and the incomparable Kate Greenwood.

Our thanks also to all the literary editors who shared information about their publications’ reviews with the Stella Prize.

[1] The Age and Sydney Morning Herald were counted as a single publication because their reviews are syndicated across both publications.