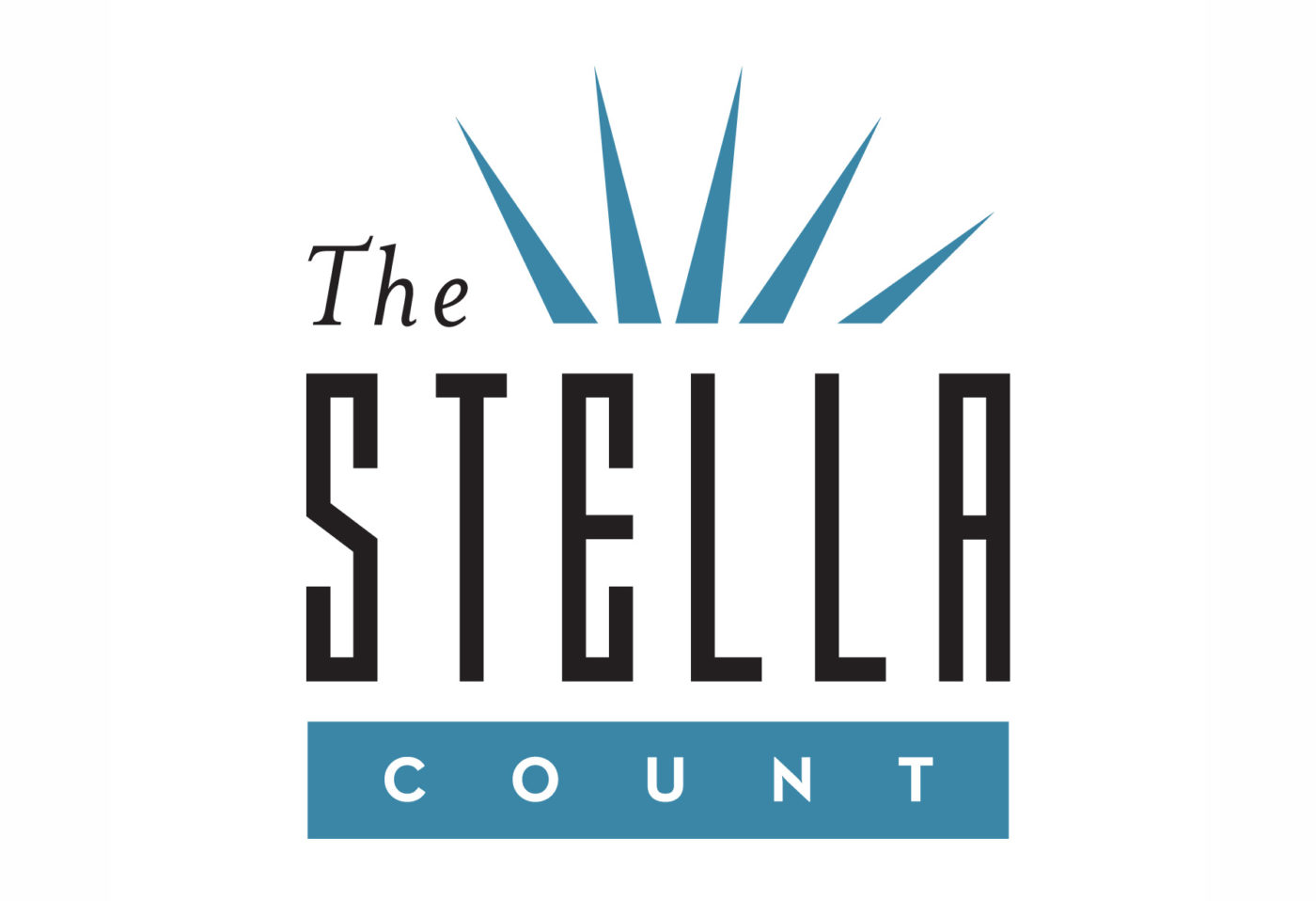 The 2015 Stella Count surveyed a total of 13 publications, including national and state newspapers, review journals and magazines.

Scroll down to learn about the new Stella Count survey, and to view the full results and pie charts for each publication’s data below, along with an analysis of notable points of interest from the results.

This year marks a new iteration of the Stella Count. We distributed a survey to female-identifying and gender-diverse authors who were reviewed in 2015 by the publications surveyed in the Count, inviting them to answer four short questions about their gender identity, sexuality, race and disability. This survey has now concluded, and the results can be viewed here.

Find out more about the rationale and resources behind this new development in the Stella Count here.

Click on a pie chart to view full data set for that publication. Analysis continues after pie charts. 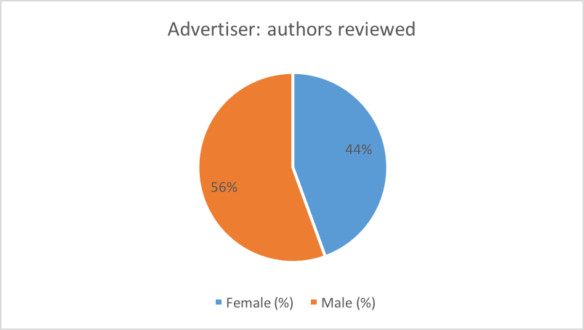 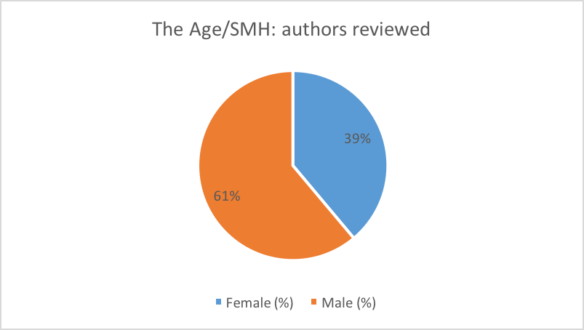 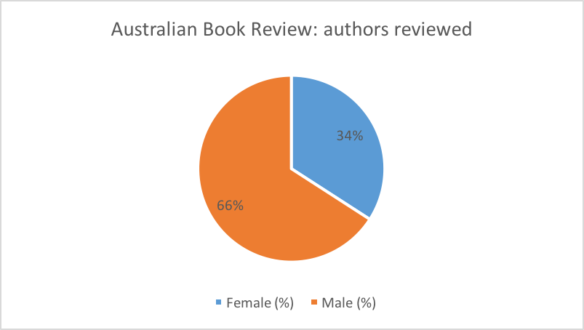 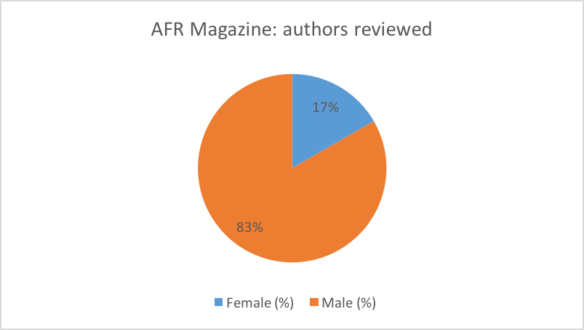 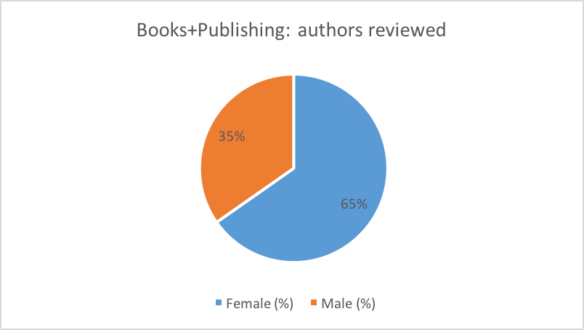 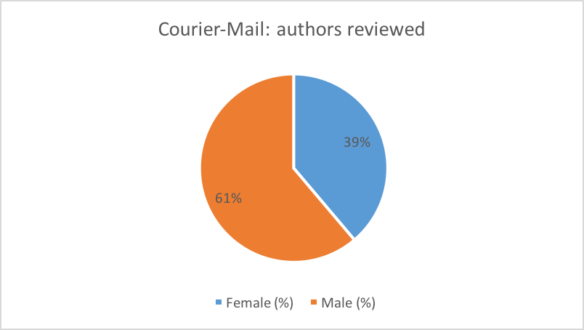 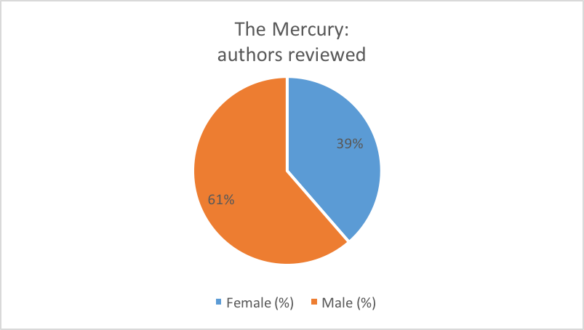 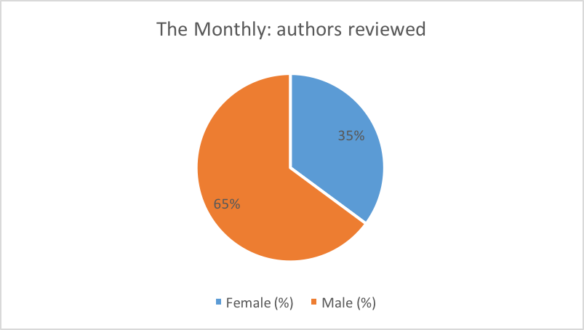 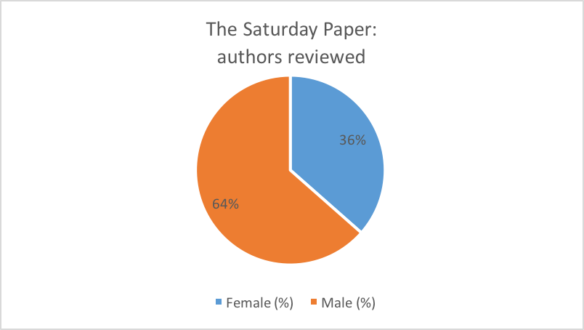 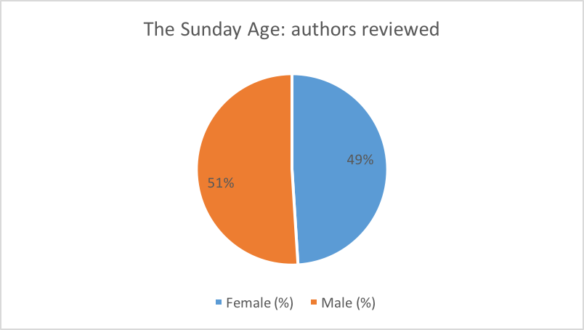 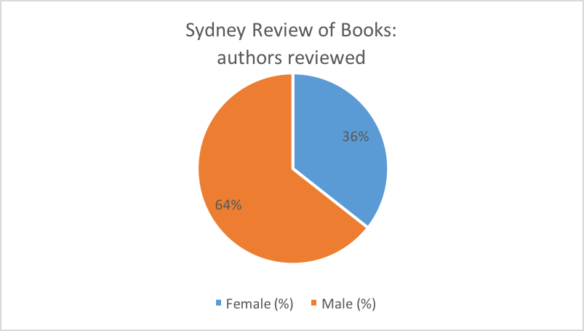 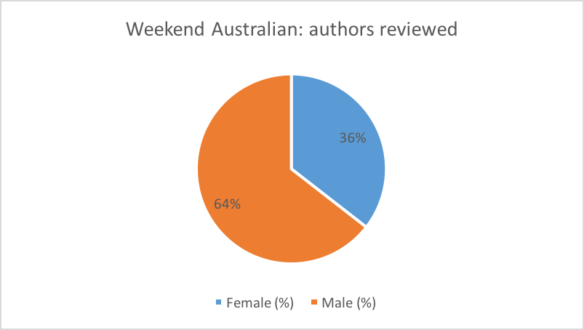 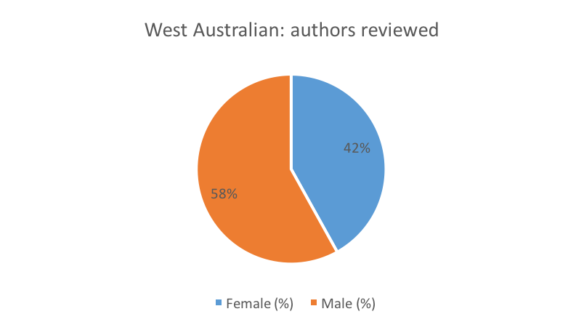 A 2015 study of the Australian Book Industry conducted by Macquarie University found that women make up approximately two-thirds of the author population. In trade publishing – i.e. non-academic publishing – the breakdown was 72% female and 28% male. There is no doubt that female authors are being published widely across all genres in Australia.

Despite this, all publications surveyed by the 2015 Stella Count reviewed more men than women – with the exception of trade publication Books+Publishing, which reviewed 65% female authors and 35% male authors.

The most marked gender disparity for authors reviewed was found in the pages of the Australian Financial Review Magazine, where just 17% of reviews were of books by female authors. Since 2011, AFR has reviewed a majority of male authors, giving them between three to five times more reviews. (77% male authors 2014; 85% male in 2013, 80% male in 2012, and 79% male in 2011.)

The below chart shows the total percentage of several notable publications’ reviews that were of books by women, tracked over the past five years. Click to enlarge. 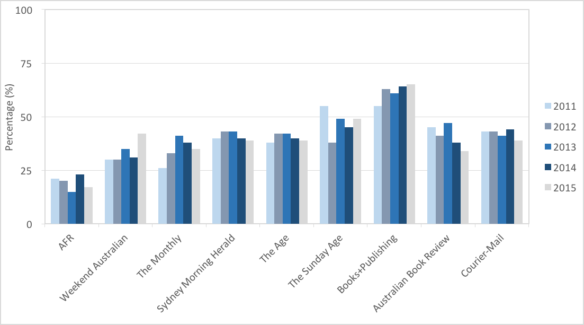 When the gender of reviewers was taken into account, the gender discrepancy is even more marked. As was observed in the 2014 Stella Count results, while female reviewers tend to review male and female authors with near-equal frequency, male reviewers are far more likely to review male authors than they are female authors. In most publications, reviews by men of female-authored books constituted between 4–15% of the total review coverage, even when the number of reviews written by male reviewers outnumbered those by female reviewers. As was the case in the 2014 results, men generally reviewed books by men two to three times more often than they did books by women.

Whether by accident or design, a cause or an effect of reviewing processes, the tendency across review publications for male reviewers to review male authors rather than female authors perpetuates cultural biases that suggest that writing by men is universal, and writing by women is for women only.

The Stella Count data on size of reviews reflected a similar prioritisation of books by male authors. Publications that publish reviews in a range of different lengths tend to include one or two longer reviews – which run over 1000 words and are often the feature piece of criticism – in each week or month’s edition. Most publications devoted the majority of these long reviews to books by male authors, rather than books by female authors.

The Sunday Age had overall the most even distribution of reviews, giving roughly equitable coverage to fiction, nonfiction and children’s books by authors of both genders. It is notable that the Sunday Age has ceased its books coverage in 2016.

The aforementioned Macquarie University study found that 65.3% of creative nonfiction authors and 67.4% of other nonfiction authors were female. The fact that an imbalance in critical coverage persists, despite there being no underlying imbalance in authorship, creates and perpetuates the perception that nonfiction by males is more worthy of critical attention, in that it frequently deals with typically masculine topics such as war, history, economics and so forth.

Notes on the data

Books with two authors or an author and illustrator of the same gender were included in this Count and logged under their shared gender. Anthologies and other books with both male and female authors or more than two authors were excluded from this Count. In all cases they made up less than 1% of the total data.

Every effort has been made to ensure these statistics are accurate, and any publication for which we were unable to obtain sufficient or reliable data has been excluded from the Count.

This information was compiled by the Stella Prize, with assistance from researchers at the ANU Gender Institute and with financial support from the Copyright Agency Cultural Fund.

The Stella Prize wishes to thank the following for their help with the Count:

The analysis of the 2015 Stella Count was compiled by Veronica Sullivan, Stella Prize Manager.