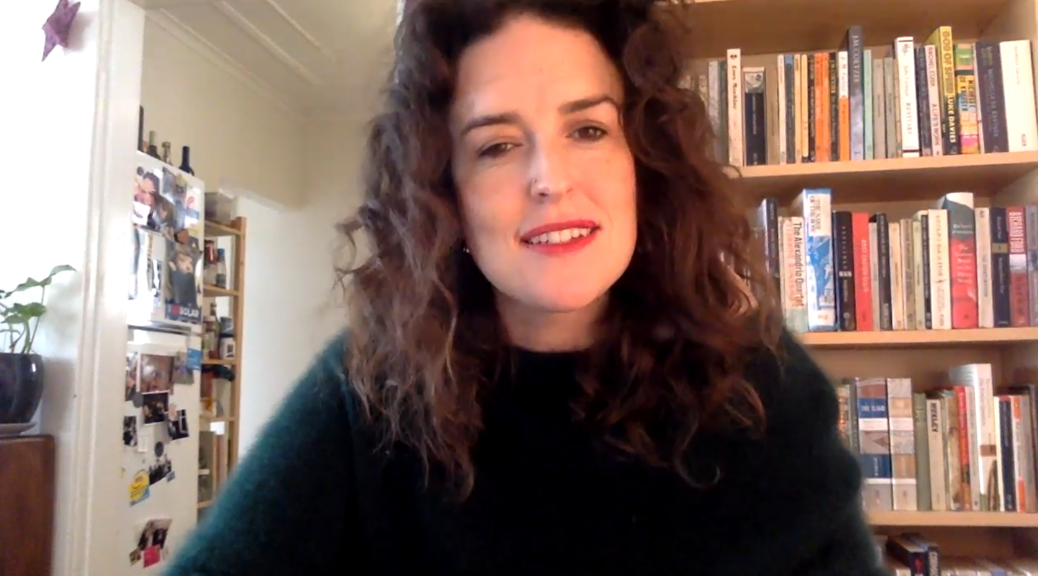 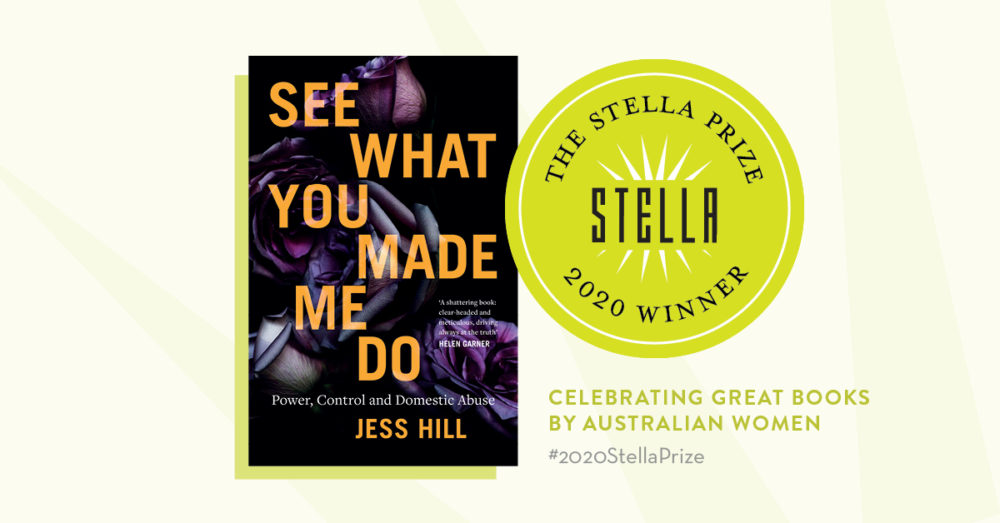 This is a huge honour, and since I’ve had a little time to digest the news, I’m actually able to string a sentence together instead of just crying down the phone.

First I want to thank the Gadigal people of the Eora nation for having me on their country, and thank their elders, past and present, for preserving their magnificent culture. When I was researching this book, time and again the most holistic and effective responses to domestic abuse came from Indigenous individuals and communities. The traditional wisdom we have in this country is the key to fixing so much that is wrong with our failing system.

My deepest respect and gratitude for the talent, fortitude and grit of the shortlisted writers: Tara June Winch for The Yield, Josephine Rowe for Here Until August, Caro Llewellyn for Diving Into Glass, Charlotte Wood for The Weekend, and Favel Parrett for There Was Still Love.

It feels like a weird time to be celebrating anything. It’s only been a few weeks since the majority of artists in this country saw their incomes evaporate virtually overnight. And because the culture warriors don’t drop tools during a global pandemic, we’re also reeling from the news that vital institutions like the Sydney Writer’s Festival and the Australian Review of Books – which publishes 300 writers a year – have lost their federal funding. We are being kept sane by the work of artists, and yet still, this government won’t lift a finger to help them.

But you know of everything I learnt writing See What You Made Me Do, one of the most enduring lessons was that even in our grimmest moments, we can hold despair in one hand, and hope in the other. In this time hope for me means that, while everything is cancelled, maybe some of us will start to see the world – and ourselves – with a greater sense of clarity. Maybe this clarity will renew our determination to fight for something better than the status quo.

I think that’s what makes winning the Stella Prize so sweet – aside from the life-changing financial prize, that is. Because the Stella Prize began as a challenge to that toxic idea of what’s ‘normal’. It was normal for men to win the lion’s share of literary prizes. Normal for men to have their books reviewed more than women. The Stella not only exposed that ‘normal’ for the lie that it was, it put literary awards in the spotlight and, lo and behold, women started winning them.  It is glorious to become one of the Stella Prize alumni – it feels like I’ve been initiated into not only a group of writers at the height of their craft, but also a pirate band of rabble rousers. I am so very here for that.

A huge thank you to the Stella judges, who had to read 170 books between them, and the entire team behind the Prize, who worked their guts out to make this event happen in the virtual world.

One question I’m constantly asked is, ‘Why did you write this book?’ To be honest, I’m still figuring that out for myself. What I’m starting to realise is that writing this book was like my calling.

What I do know, is that aside from the mysterious functions of my subconscious, I wrote this book because it needed to be written. I was tired of hearing victim-survivors say that their friends and family couldn’t understand what they had been through, or why they had made certain choices. In the forty years since the first shelter opened in Australia, nobody had written a book that revealed the private and public phenomenon of domestic abuse in this country. That had to be rectified.

But even as I was signing the contract in the summer of 2016, a large part of me resisted. I knew the personal toll of writing this book would be profound – and it was. If I’m to be honest, the almost four years I spent writing it took me to a dangerous edge. I earnt barely any money, and we were sent to the brink financially – at the same time as we were having our first child. I lost friends, I missed weddings. There was almost no time – apart from the hours I spent with our newborn daughter – when I wasn’t working.

But I don’t for a minute regret the time I spent writing it. The struggle was very real, but it was also a magnificent process. Every day, I had a perception turned upside down. Or I’d read something that was just stunning.  Or I’d talk to someone and their story would just be both harrowing but also amazing, and their resilience and their resistance would just blow me away. My own relationship with my partner David was utterly transformed – eventually for the better – by what we both learned during this process.

The thing is: this is not a niche issue, or a women’s issue. This is one of the most important and greatest stories going on in this country right now, and we all need to understand it because there are literally millions of us walking around who have experienced it – as adults or as children. What we also need to understand is that while all intimate relationships are vulnerable to abuse, domestic abuse is not inevitable. It is a social problem that can be solved. And it must be solved. But first, we have to believe that that is possible. That’s what I set out to prove with this book.

Since I emerged from my solitary writing confinement last year, the experience of bringing this book into the world has been both exhausting and utterly transcendent. It has connected with people in ways I never dreamed possible. Hundreds of people share their stories with me. There are hugs and tears in the signing lines. Then there are people who just hold my gaze – and we both know. I’ve even had men confess their own abuse; they’ve bought the book for themselves, and sometimes for their adult children. Others approach looking uneasy; they tell me they’ve only just, upon hearing me speak, realised their partner is abusive.

And then there’s everybody else – people who have no history with domestic abuse, or who don’t think they have. They’ll say things like ‘I can’t wait to read this’, and then backtrack guiltily, because you’re supposed to say that about a book like this.

Well, why not? I’ve been obsessed by this subject for more than five years because it is fascinating. Why shouldn’t we talk openly about the entire spectrum of intimacy – power, control – even violence? This is not just a book about men beating their wives; it is about the culture that underpins and enables abuse. It is about love, it is about power. Part of the Australian story has been our struggle to face the difficult truths of our recent history. To me this is a book about what happens when there’s nothing in our culture to help us process these unseen forces, and instead they erupt behind closed doors. Our future depends on telling and reading these stories, not recoiling from them. To me, this book is about all of us. That was actually my working title for this book: ‘The Story Of Us’.

I got an email the other day that perfectly exemplifies this. It was from a guy who had just read it with his book club. He writes that:

‘As a fella I felt drawn into this dark vortex of our own cultural problems with masculinity and the patriarchy, and the book put words (shame and entitlement for instance) to experiences that all the guys and girls in the club were able to openly discuss.  I feel like you have opened up a new toolbox of words and concepts I can reach into to understand domestic abuse and ourselves.  We feel more empathetic and capable of trying to help as a result. I’m glad you wrote this book, we’re better people having read it.”

Feedback like that makes all the lonely hours worthwhile.

This book couldn’t have happened without a village supporting it and me.

First and foremost, my partner, David Hollier, who not only edited every word of this book but also co-wrote the chapter on Shame. David, even when you were fed up with this book, you were still utterly devoted to it, and worked tirelessly with me to make sure it was right. For all the late-night discussions, the weekends sacrificed, the endless housework and solo parenting – I love you, and I am so grateful.

To my family: I am so thankful for the love and wonder you brought to Stevie during this time, and for the hours you gave me to write. Mum, you devoted countless days and hours, and I am forever indebted to you for that. Dad, you turned up like clockwork every week, and Sue, you made that possible. Lorraine, for the weeks you stayed you were our rock.

My brother Joel has been a one-man publicity machine for this book, and a source of unrelenting enthusiasm.

Huge thanks also to Nick Feik, the first editor who commissioned me to write a longform essay about domestic abuse for The Monthly. What vision – at Black Inc, I think he was the first to understand that this was an issue that had not been properly explored, and he risked supporting what was then a still unglamorous and treacherous topic. To Chris Bullock at Background Briefing, you had the courage to go where few other editors had dared to go – into the secretive, hostile environment of the family law courts.

At the marvellous Black Inc Books – first, Aviva Tuffield, who commissioned this book and forgave me for every missed deadline, is the reason this book exists.

To Kirstie Innes-Will and Chris Feik, your fine intellects were a boon to this book, and I am forever grateful for how hard you worked on it, and for the months you lived with it in your heads. To my publicist Marian Blythe, your dedication to getting this book into people’s hands was stunning.

Last but certainly not least, thank you to everyone who shared their knowledge, their story, their expertise, and trusted me to do the right thing with it. It still makes me shudder sometimes to remember the people who sat with me, shaking with the pain and trauma of what they were telling me, taking me to places of such deep personal pain and darkness. These were people who came to me with the belief that bringing that pain forward – and putting their stories on the line – might just make people understand, and might help to protect future generations. There was something truly awesome about what you all did. Every day I sat and stared at a blank screen, every time I missed another social gathering, I did it for you. I hope you feel honoured by this book.

– Jess Hill, winner of the 2020 Stella Prize for See What You Made Me Do