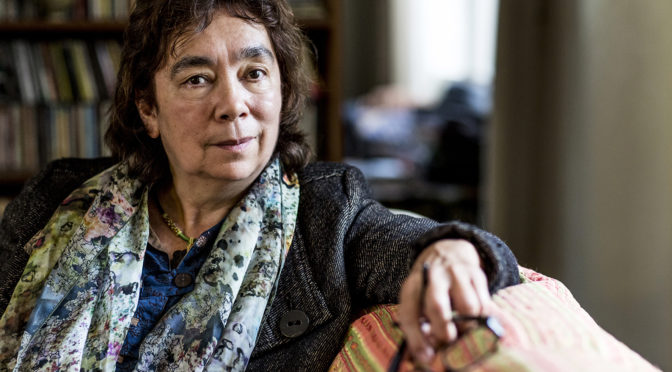 Alexis Wright is shortlisted for the 2018 Stella Prize for Tracker, the collective memoir of Aboriginal leader and visionary Tracker Tilmouth. In this special Stella interview, Alexis shares insights into how the book came about, the importance of Tracker Tilmouth’s legacy and what she’s working on next.

Please tell us something about how you came to write Tracker?

Tracker Tilmouth was one of a kind. Many said he was larger than life and he was. He was unique in his capacity to brighten the world of those who knew him, and anyone who met him would say that he was unforgettable. I thought it was very important to develop this book because Tracker was my great friend and because of his significance to Aboriginal people everywhere, and to Australia. He played a major role in shaping the history of our times through many of the hard-won land rights achievements in the Northern Territory, forging groundbreaking native-title agreements; creating educational, training, job opportunities and income for Aboriginal communities; and thinking how to develop Aboriginal economic and property rights. He was a visionary and a fighter. He devoted himself to thinking how to develop a real economy for Aboriginal people in Northern Australia. His great mission was to create an economy that would give true meaning to the enjoyment of land rights, to safeguard the future of our culture.

Tracker had often asked me to write something for him, or with him, and usually the topic of this writing was the stupidity he saw in the political failures happening around him. He had an extraordinary analytical mind for these matters, and it was just about impossible to keep up with him intellectually, and the breadth of his thinking about economic development in the Aboriginal world was far too advanced for most people around him. This was why I thought this book was important. His quick and sharp wit was endless and legendary, and it got him into places we needed to be and we could learn from the way he worked. Very few people could keep up with him physically because he was always moving to work with communities and people everywhere, or travelling to work on major ideas, strategies, and complex political and economic developments. After completing The Swan Book I really wanted to find a way to work with Tracker to develop this book, to do that writing he wanted, but not as a biographer. It was only by focusing in on how to capture some of the essence of who he was, that I decided to follow the Aboriginal principle of consensus.

Approximately how many hours of interviews did you do, and how long did this book take to research and write?

I was never counting the hours of working on this book or with Tracker, but it was possibly about sixty, eighty, or a hundred hours or more of recordings conducted with people across the country including with Tracker, and a few people now living overseas. I listened to all of the recordings many times to ensure the accuracy of the transcripts, the grammar and speech patterns to remain true to the original recording.

The research was ongoing because Tracker’s work was at the forefront of the Aboriginal world in international, national, state and territory politics, as well as working with Aboriginal people in communities right across the country. The recordings, writing and shaping of the book took five or six years on and off with other work, the same time as Carpentaria and The Swan Book.

Was everyone willing to be interviewed or did some people need persuading?

Practically everyone I approached was willing to be interviewed and wanted to talk about Tracker. It was also very emotional for some people to talk about him after he passed away because of cultural reasons, and their deep sense of loss, and the huge gap he left in our lives.

At what point in the process did you decide to use multiple first-person accounts – and why?

At the beginning of the process I had decided that Tracker was too important in the Aboriginal world and our history to arbitrate in a western-style biography, and I thought that many people who knew him would agree with me on this. I knew that I needed to take an approach that would be closer to an Aboriginal methodology of storytelling consensus. The introductory essay at the beginning of Tracker explains this process.

Where do you do most of your writing?

I write in my study at home, in the garden and everywhere. Sometimes I write in the beautiful, dome reading room at the State Library of Victoria. I write in my mind all the time, so I probably could write anywhere, because I think about the manuscript I am working on until it is finished.

Can you tell us something about what you’re working on next?

I am completing a new novel called Praiseworthy, and enjoying research on the novel I want to write after Praiseworthy is finished.

Alexis Wright is a member of the Waanyi nation of the southern highlands of the Gulf of Carpentaria. Her books include Grog War, a study of alcohol abuse in Tennant Creek, and the novels Plains of Promise, The Swan Book and Carpentaria, which won the Miles Franklin Literary Award, the Victorian and Queensland Premiers’ Literary Awards, and the ALS Gold Medal, and was published in the US, UK, China, Italy, France, Spain and Poland. She is currently the Boisbouvier Chair in Australian Literature at the University of Melbourne.