The Stella Interview: Heather Rose on The Museum of Modern Love 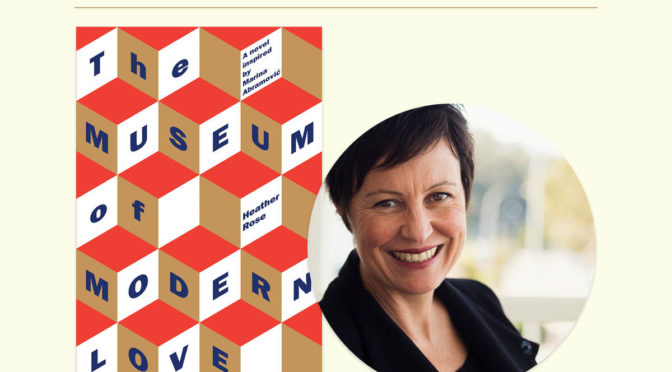 Heather Rose is shortlisted for the 2017 Stella Prize for her novel The Museum of Modern Love. In this special Stella interview, Heather discusses the murky line between fact and fiction, the power of art, and what it feels like when a character in your book gives you feedback.

You have called your Stella shortlisted novel, The Museum of Modern Love, ‘a strange hybrid of fact and fiction’. Is there a clear line between the two within the book?

I’m not sure there is ever a clear line between fact and fiction. The story occurs within and around a real event – a 75-day performance at the Museum of Modern Art in New York in 2010 by the artist Marina Abramovic, called The Artist is Present. Abramovic appears as a character in the book. I did extensive research, but this lives within a web of fictional characters and relationships. It was a delicate process to balance the weighty responsibilities I felt for the facts within the larger fictional world of the novel.

The Museum of Modern Love follows many different characters, but there is also an omniscient narrator who is very important to the novel’s imagination and structure. Could you talk about this narrator’s role, and how you envision their presence in the story?

The omniscient narrator arrived early, but I wasn’t sure I had the confidence to include them, so I removed them for many years. In the last year they slipped back in, and that was the final puzzle piece after eleven years of work.

I’ve always loved the angelic beings in the film City of Angels. I think this narrator is a little like them. Mostly invisible and yet sometimes powerfully felt. This timeless presence has a prime directive to help artists of various persuasions ‘do something worthwhile before they die’. If I had to cast the movie version of the novel, I’d choose Tilda Swinton for the narrator. Marina Abramovic could play herself …

The book is directly inspired by Marina Abramovic’s performance piece, The Artist is Present, and she gave you permission to include her as a character. Have you had feedback from Abramovic as to what she thinks of the novel?

Marina’s assistant conveyed to me that Marina had read the book in India and had rung him to say, ‘it is wonderful and so well done’. It is extremely strange when a character in your book gives you feedback, but it was a huge relief to think she liked it.

The Museum of Modern Love is partly about the power art can exert over individual lives. What power do you think art possesses in society today?

I’ll leave that to Jane in The Museum of Modern Love, who says: ‘I think art saves people all the time.’ That’s the power of art.

Do you have one (or more) favourite Australian women writers?

I love the work of my co-author for my children’s novels, Danielle Wood (together we write under the pen-name Angelica Banks). She is Australia’s Angela Carter. Her adult fiction is dark and kind of twisted. I also love my many fellow Tasmanian authors – Katherine Scholes, Adrienne Eberhard, Kathryn Lomer, Rachael Treasure, Sarah Day, Katherine Johnson, Julie Hunt, Karen Knight, Carmel Bird, Amanda Lohrey … and more!

How did you feel when you learnt you had been shortlisted for the Stella Prize?

I live in Tasmania, and for 20 years and across seven novels, I have worked in relative obscurity. So I was, in truth, a little bit stunned. A friend bought star-shaped sparklers. We lit them on the beach and ran about in the dark whooping!

Do you know what you would like to work on during your Grasstrees Writing Retreat?

I’m well into a new novel set in Tasmania, so I’m sure that will keep me entertained for three weeks. I’m also writing another children’s series with Danielle Wood. When writing for adults stops being fun, writing for children is a brilliant challenge. The Museum of Modern Love is Heather Rose’s seventh book. Her work spans adult literary fiction, children’s literature, fantasy/sci-fi and crime. Her previous novels include White Heart (1999), The Butterfly Man (2005) and The River Wife (2009). She is co-author (with Danielle Wood) of the acclaimed Tuesday McGillycuddy series for children (written under the pen-name Angelica Banks and published internationally).

Heather won the Davitt Award in 2006, and her work has been shortlisted for the Nita B. Kibble Award and the Aurealis Awards, and longlisted for the IMPAC Award. She was a recipient of Varuna’s Eleanor Dark Fellowship and was the inaugural Writer in Residence at the Museum of Old and New Art (MoNA) in Hobart from 2012 to 2013 where she did much of the research for The Museum of Modern Love. Heather is currently studying Fine Arts at UTAS.