The Stella Interview: Emily Maguire on An Isolated Incident 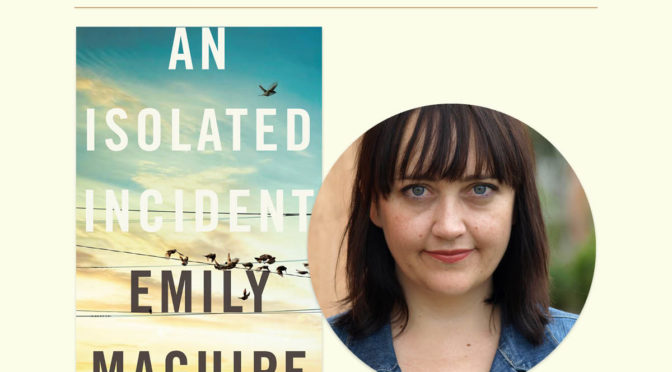 Emily Maguire is shortlisted for the 2017 Stella Prize for her novel An Isolated Incident. In this special Stella interview, Emily discusses the crime genre, the ways we deal with (and fail to deal with) violence against women, and her favourite Australian women writers.

The Stella judges described An Isolated Incident as ‘a murder mystery that deftly transforms the genre’. Do you think of it as a crime novel? Were you conscious of either writing into that generic tradition or subverting it – or was that just the form the story took?

I didn’t think of it as a crime novel, but as a big reader of crime fiction and true-crime writing I definitely have an awareness of the tropes and conventions of those genres. One of the sparks for the book was how much stuff I’d read and seen where the death of a beautiful young woman is a jumping off point to tell a story about the professionals who are tasked with solving or avenging her murder. I kept thinking about the enormous hole the death of any individual creates in the lives of those who love her, and how often those stories are skipped over in favour of more detail about the solving of the crime – the puzzle of it rather than the meaning.

As I wrote, the story expanded to be as much about how we live, as women, as human beings, knowing that this kind of violence is common enough that just about everyone you ask could tell you the details of half-a-dozen different real-world horrific murders. There’s something so dark and sad about that, but instead of talking about why it might be so, we turn those stories into entertainment, neutralise their reality.

The character of Chris has a powerful voice, and it seems like readers have responded particularly strongly to her. Where does she come from? Do you have a special relationship to her character?

An Isolated Incident is my fifth novel and never has a character come to me so easily and completely as Chris. Sometimes I think she’s a version of me: who I’d be if I’d made a few different choices and been a little less lucky in life. She’s definitely the kind of woman I’d be friends with. Wherever she came from, I think of her as a gift. This book took me to some dark places, but it also allowed me to spend time with Chris and I looked forward to that so much, every day, even when what she was going through was so hard.

Do you have any favourite Australian women writers?

I have so many! Elizabeth Harrower, Ali Cobby Eckermann, Dorothy Porter and Susan Johnson have all been essential to me. Their work always shows me not just how to do this thing better, but also why to bother, why any of it could possibly matter. Honestly, though, there are dozens and dozens of Australian women writers whose work has been important to me in different ways over the years.

You’ve been a Stella Schools Ambassador for several years, and were a Stella Prize judge in 2016. How does it feel now to be shortlisted?

It feels delightful! Reading, thinking about, celebrating and sharing women’s writing is such a huge part of my life and so, obviously, Stella is a prize very close to my heart and I couldn’t be happier about being shortlisted.

Emily Maguire is the author of the novels Taming the Beast (2004), an international bestseller and finalist for the Dylan Thomas Prize and the Kathleen Mitchell Award, The Gospel According to Luke (2006), Smoke in the Room (2009), Fishing for Tigers (2012) and An Isolated Incident (2016).

Emily enjoys a high-profile in Australia as a social commentator, with her articles and essays on sex, religion and culture having been published in newspapers and journals including The Sydney Morning Herald, The Financial Review, The Big Issue and Griffith Review. She is a Stella Schools Ambassador and was a judge of the 2016 Stella Prize.