The Stella Interview: Maxine Beneba Clarke on The Hate Race 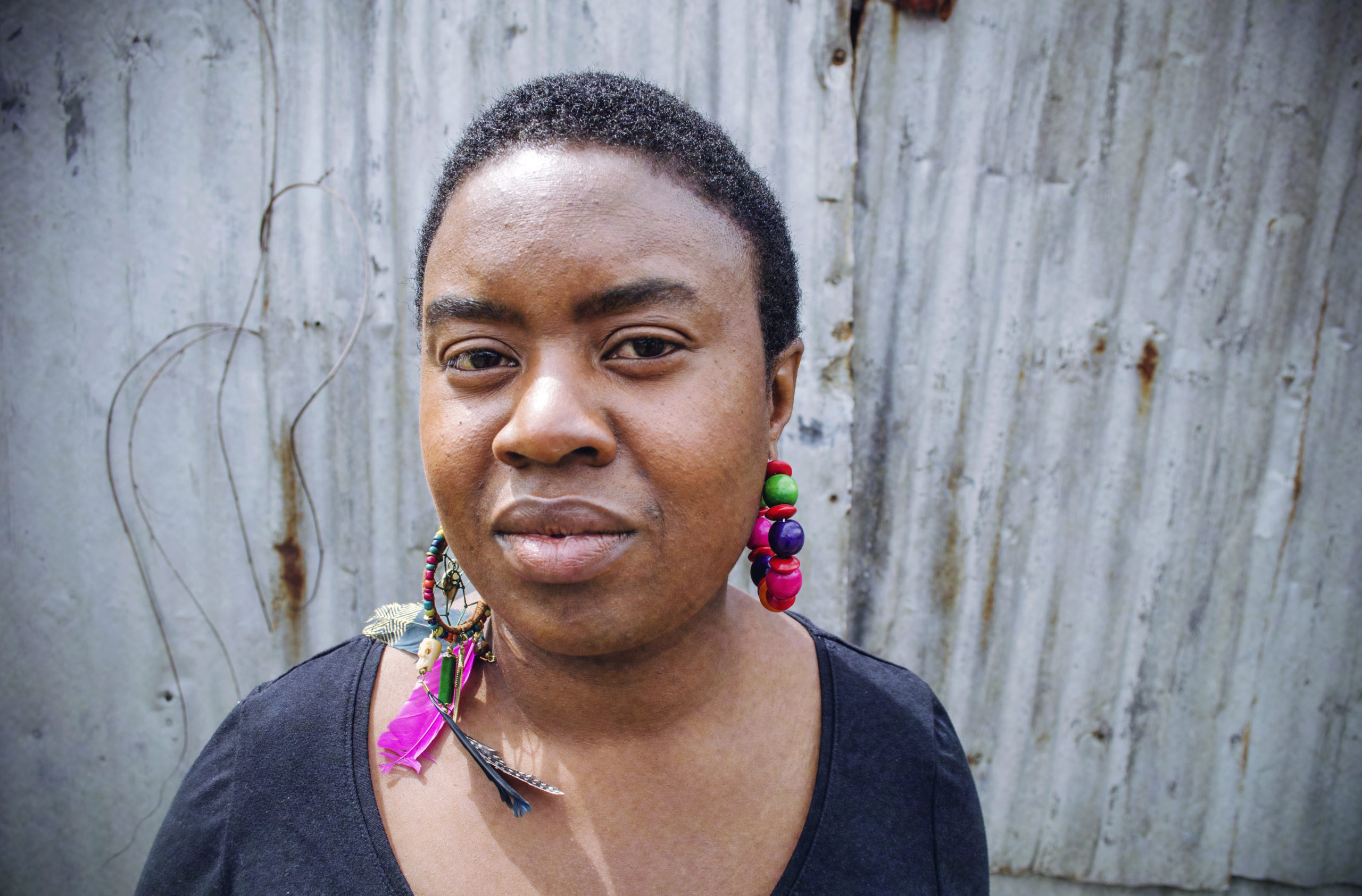 Maxine Beneba Clarke is shortlisted for the 2017 Stella Prize for her memoir The Hate Race. Maxine is the first author to be shortlisted for the Stella Prize twice, after her short story collection, Foreign Soil, was recognised in 2015. In this special Stella interview, Maxine shares some thoughts about the process of memoir writing, the pull of the poetic form, and what it’s really like to write while female.

What was your writing process for your 2017 Stella Prize shortlisted memoir The Hate Race?

Initially, my notes for The Hate Race were just a series of memories: there was a process of really mining my life, of trying to think about the incidents and encounters that were indelible in my childhood; funny things, sad things, bizarre things. Any major interaction I had that pivoted around race. I broke the material down into small vignettes – initially not knowing which material would make it into the final manuscript.

I knew with this book there was a painstaking balancing act that would be needed – between humour and sadness; triumph and despair – in order for the work to sit as I wanted it to.

For me, in order to justify telling such a brutal story, and in order to justify opening up my life in this way, the book needed to have a targeted purpose beyond hopefully being interesting and well told. So I agonised a lot about how to craft something that readers with similar experiences would find validating, but that readers outside the experience could also have access to, and engage with.

I don’t think I’ve ever thought as much about the way I craft my work as I did while writing The Hate Race.

I’m very used to working in short form as a poet and short fiction writer, and this is my first long-form narrative, so it was also a process of figuring out how to navigate a completely different genre and form: how to pack the punch of my short fiction into a longer work, while also sustaining the narrative, and while working with nonfiction material, which is much more limiting.

There was significant historical research as well – charting my parents’ arrival in Sydney from London; looking into race relations in the United Kingdom and Australia from the mid ’60s to the mid ’90s; figuring out how these historical moments interacted with or highlighted what was going on in my on world.

How have you felt about the passionate responses to The Hate Race, both from readers who can empathise with your experiences and readers whose eyes have been opened by it?

The response to The Hate Race has been overwhelming. Writing this book was excruciating. Except perhaps for a month or so at the end where I was doing line edits, and really working on shaping the book structurally and on the poetry of the language, I didn’t enjoy writing it. This was new for me.

There was also always doubt in my mind about whether the book would or should be published, even though at the time of working on it the book was already signed to a publisher based on a short initial sample chapter I’d written.

There were a few frantic phone calls to my publisher saying I’m not sure we should do this, or maybe we should hold the book over. The last discussion we had like this was about four weeks before the uncorrected proof went out to booksellers: it was that touch-and-go.

So to have come out the other end, and see that the book has been loved, and engaged with, and talked about is absolutely incredible. To receive messages from readers saying this happened to me, and now I finally have a reference point, or I watched stuff like this happen, and I never will again or I’ve been waiting for this book for a very long time is really emotional, even six months down the track from publishing it.

The Hate Race is not a book that everyone will love, but I’m proud of the impact it’s had, and the conversations it’s started. I don’t think I will ever again underestimate Australian readers, and their hunger for engagement, and their willingness to grapple with difficult or uncomfortable themes. As a writer, this is extremely liberating.

In my case, I was a parent before I was a published writer. I think having kids brought a completely new perspective to my work, but there are definitely time constraints that come into play, particularly if you’re their primary carer. As an emerging writer, this meant trying to find writing time, but as an early career writer now it’s more about finding the time to take advantage of opportunities that do come my way. This year, for example, I’ve turned down festivals in Hong Kong, Edinburgh, Myanmar, Georgetown and Ubud. But while it absolutely burns to have to say: I’m sorry I can’t make it, I have conflicting responsibilities, these are in different ways, decisions a lot of mothers make. I also occupy an extraordinarily privileged position just to be a published writer in the first place. There’s extreme power in having a writing platform that I think probably isn’t acknowledged enough.

I think because all of my work is very politically engaged, and because I’m a black woman writer, my work is often reviewed in a different way from, say, something that might otherwise be pigeon-holed as domestic writing because a woman wrote it and it’s based around the home.

The irony is, of course, that while being thought of as a ‘big theme’ book, The Hate Race is domestic by its very nature: it’s simply a memoir about a small girl growing up in an ordinary family of five, in a semi-rural suburban village in Australia in the ’80s and ’90s.

Have you had any significant professional or personal mentors in your writing career?

My professional mentors are all local people – mostly writers themselves – who saw something in my work, and took enormous – and sometimes unexpected – leaps of faith that really catapulted my work forward, or helped develop it.

David Ryding (now director of the UNESCO Melbourne City of Literature office), a former director of the Emerging Writers’ Festival, programmed me on the main stage almost a decade ago, after a completely cold-call email I sent him telling him about a poetry chapbook I had just put together.

Melbourne writer Jeff Sparrow, former editor of Overland magazine, gave me the ‘keys’ to the Overland blog a decade ago as a forum for publishing my poetry, and also published and edited my first nonfiction essays in Overland.

Francesca Rendle-Short, Paddy O’Reilly and Sam Twyford-Moore, all phenomenal fellow writers whose work I really respect, were the judges of the 2013 Victorian Premier’s Unpublished Manuscript Award, which I won for my first fiction book, Foreign Soil, and that changed the course of my writing career.

Lisa Dempster, the current director of Melbourne Writers Festival, took a chance on programming me for the opening keynote of the festival in 2016 despite my relative inexperience. Erik Jensen, the editor of The Saturday Paper, phoned me out of the blue three years ago to ask me to write for him: a journalistic baptism of fire that ultimately completely changed the way I write, and which was instrumental in my tackling such intense self-portraiture in The Hate Race.

These aren’t official mentorships per se but, without each of these people and their support for my work, my journey as a writer would have been incredibly different. And I’m sure there are also others who I’m forgetting!

On a more personal level, though, the friendship and camaraderie of fellow Australian women writers whose work I admire, such as Alice Pung, Melissa Lucashenko, Emily Bitto, Randa Abdel-Fattah, Lian Low, Ellen van Neerven, Koraly Dimitriadis, Favel Parrett, Inga Simpson, and too many others to name – also sustains me.

You’ve published books across many different forms: short fiction, poetry, memoir and a children’s picture book. Do you feel most comfortable writing in any one form in particular?

I think I will always have a natural tendency toward the poetic. Poetry is there in my short fiction, in my memoir, in my Saturday Paper columns, and in my children’s book writing. I often say that I feel my job is to: try and write beautifully about ugly things.

I think unlocking the sheer beauty of language is like some kind of invisibility cloak – it allows you to travel anywhere; tackle the most unwieldy of subjects.

I definitely intend to keep pushing myself to explore different genres. For me: words are words are words. Stylistically, I think my work has found its groove, so what I find really exciting at the moment is tackling different forms and different collaborations with other writers and artists, and seeing what impact this has on my process and writing. At the moment I’m in the midst of co-writing a stage adaptation of The Hate Race, scheduled to be performed at Melbourne’s Malthouse Theatre in 2018. I feel extremely, extremely blessed that the journey so far has been so varied and interesting. May it always be so!

Maxine Beneba Clarke is a widely published Australian writer of Afro-Caribbean descent and the author of the poetry collections Gil Scott Heron Is on Parole and Nothing Here Needs Fixing. Maxine’s short fiction, nonfiction and poetry have been published in numerous publications including Overland, The Age, Meanjin, The Saturday Paper and The Big Issue. Her critically acclaimed short story collection, Foreign Soil, was shortlisted for the 2015 Stella Prize. A collection of Maxine’s poetry Carrying the World, her memoir The Hate Race and her first children’s picture book The Patchwork Bike were all published in 2016.