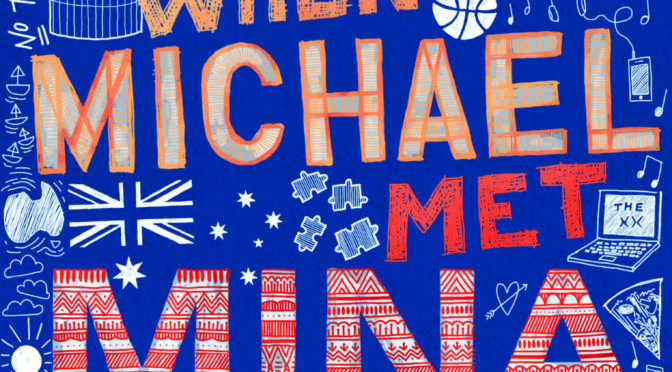 Stella Schools Ambassador Randa Abdel-Fattah’s new YA novel, When Michael Met Mina, delves into the charged politics of refugee policy in Australia at a time when the treatment of refugees and asylum seekers is a burning topic of public debate. When Michael Met Mina tells two parallel stories: in one, a young refugee and her family are catapulted into a world where casual racism is the norm; in the other, a young man slowly comes to realise that he has grown up following his parents’ beliefs without questioning their underlying logic.

When she was young, Mina and her family came to Australia by boat, as refugees from Afghanistan. After settling in the Western Sydney suburb of Auburn, the family suddenly has to move to the affluent North Shore when Mina receives a scholarship to an elite private school. Once there, she comes into contact with Michael, who she has met before – on the opposing side of a refugee rally. Michael’s parents have founded a new political party called ‘Aussie Values’, and Michael has quietly absorbed his parents’ anti-immigration stance. Michael’s and Mina’s attraction to each other causes both to ask questions about what they really stand for.

When Michael Met Mina is a love story, but its sharply observed politics and compelling characters make for a far more complex tale than familiar boy-meets-girl storylines. Abdel-Fattah also teases out the complexities of family life, and of friendships old and new, delivering an intricate depiction of both characters and politics that resonates with the current state of affairs in Australia.

Randa chatted with Stella Schools Program intern Sarah Farquharson about her doctoral research into Islamophobia, how her job as a writer is to make her characters uncomfortable, and why she hopes that young readers will learn to recognise and challenge the everyday, systemic racism all around us.

Sarah: Tell us about where the idea for this book came from. What drove you to write When Michael Met Mina?

Randa: Just over three and a half years ago I quit law and started a PhD to explore racism, specifically Islamophobia, from the point of view of its perpetrators. While I was conducting my fieldwork, interviewing people, attending anti-Islam and anti-refugee rallies, a character popped into my head. Well, two characters to be precise. One was a young Afghan refugee, a ‘boat person’ we see maligned and stigmatised by both sides of politics. Bright, fierce, courageous, scarred, she wouldn’t budge from my head. I thought about what it would mean for this young girl to have fled Afghanistan, grow up in Western Sydney, only for me to then throw her into a private school in the lower North Shore of Sydney. I called her Mina.

The other person who popped into my head at one of the rallies I was attending was a boy called Michael. As I interviewed people about their ‘fears of being swamped by boats’, about the ‘Islamisation of Australia’, about the so-called ‘clash of civilisations’, I wondered what it would mean to be a teenager growing up in a family peddling such racism and paranoia. How do you ‘unlearn’ racism? How do you find the courage to question your parents’ beliefs? How do you accept responsibility for learning about the world on your own terms? That’s when I decided to write a story that took these two characters, Michael and Mina, and threw them at each other.

Sarah: Refugees are commonly politicised in the media, especially in Australia, but your book really humanises the refugee experience through Mina and her family. Do you think storytelling can combat the often misleading power of the media, and depict refugees in a way that acknowledges the complexity of the issue?

Randa: Actually I don’t see the issue as complex. I think politicians have led us to believe that it’s complicated. But it’s quite simple as far as I can see it. Australia is a privileged country that is involved in wars that create refugees. Some of those refugees risk their lives to escape persecution, violence and even death. The ones who try to reach us for protection, we lock up. We lock them up on islands and countries we’ve financially cajoled into doing our dirty work. We lock people up and when they self-harm, self-immolate, are killed in our care, we deny responsibility. For me, Mina’s story is about simplifying the issue to focus on some basic truths. Who do we count as human? What is privilege? Justice? Whom do we show empathy for and whom do we shun? What is it about our fears, insecurities, identity that needs an enemy, an ‘other’?

Sarah: Michael and his family are also treated with sympathy in your book. I loved that Michael’s right-wing parents were really personable and in some ways reasonable-seeming characters. How important do you think it is for young people to discover that they can completely go against their parents’ views and their upbringing?

Randa: It was really important to write Michael’s parents in such a way that readers wouldn’t be able to dismiss them as ‘racist bogans’ or ‘far rights’. We often think of racism as something extreme, fringe, based on ignorance. This allows us to ignore everyday, systemic racism; the racism expressed in polite, liberal, middle-class circles; the racial logics that underlie many ‘reasonable’-sounding arguments. So I wanted young people to recognise these arguments as grounded in the same racial logics and to hopefully feel empowered to challenge them.

Sarah: When Michael Met Mina portrays a few sets of friendships that are quite complex in different ways. Why are you drawn to write these sorts of complex relationships?

Randa: I think many of the closest friendships are often complex and ambiguous. There are uncomfortable spaces that get ignored or glossed over, and as a writer my job is to make my characters uncomfortable and throw as much as I can at them!

Sarah: The book alternates between Michael’s and Mina’s points of view, which allows the reader to get inside each character’s head, with just enough overlap between their perspectives to keep it interesting. What made you decide to use this kind of structure?

Randa: I was very conscious of using a structure that has been quite popular lately and I was nervous about that. But because this is a story of dialogue – of argument against common narratives – I felt that the alternating-character structure was really important to tease out those opposing stories and life worlds.

Sarah: Lastly, what are you working on next?

Randa: Rest. Haha. I just finished my PhD, and I wrote When Michael Met Mina during my PhD. And I’m about to have a baby. So I’m working on how not to work, how to take time out. (Although I am working on the screenplay of Does My Head Look Big In This? that is due at the end of the year, so maybe rest is not the right word after all …)

When Michael Met Mina is out now at all good bookstores.

Randa Abdel-Fattah is an award-winning author, former lawyer, regular media commentator and doctoral candidate researching Islamophobia in Australia. Her books for young people include Ten Things I Hate About Me, Where the Streets Had a Name, Noah’s Law and Does My Head Look Big in This?. She lives in Sydney with her husband and three children.

Sarah Farquharson is an editor and graduate student living in Melbourne. She is a people person, a word person and a music nut.