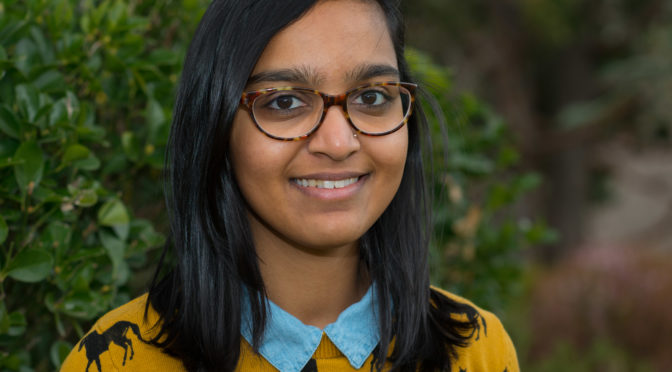 The Stella Prize chats with Schools Ambassador Zoya Patel, the founder/editor of online feminist journal Feminartsy, and the former Editor-in-Chief of Lip Magazine.

Stella: Do you remember the first character you saw yourself in? How old were you?

Zoya: The first character I remember seeing myself in was Hermione Granger from Harry Potter – she was the first female book character I remember reading who was around my age, had frizzy hair like me, and was a bit of a goody-two-shoes nerd (also like me). It was so exciting to see a girl being celebrated for her smarts, and to not see her storylines revolve around romance or her appearance, or arguments with her female friends.

The one flaw was that she was presumed to be white – like virtually every other character in children’s books and young adult novels when I was growing up. As an Indian Australian, I often felt like my life would be more interesting or exciting if I was white, like the characters I loved in my favourite books. It would have been great to read about a culturally diverse young woman!

Stella: What books changed your life? Were they by men or women? Did the author’s gender play a role in your choosing or liking these books?

Zoya: I’m lucky in that there are lots of books that changed my life, but a few definitely stand out. I remember reading A Room of One’s Own by Virginia Woolf as a teenager, and just being blown away by her eloquence and the feminist values that underpinned her writing.

At that time, most of what I read through school was written by men, so reading Woolf felt quite revolutionary, and it made me really think about gender equality more deeply than I had before. Her gender definitely made me feel more of a resonance with her writing in that sense.

Stella: How has the YA literary landscape changed? What do you see happening in YA now that you wish had been around when you were a teen?

Zoya: It is SO exciting to see how the young adult literary landscape has changed since I was a teenager. One of the biggest things for me has been seeing more diversity in the characters we’re seeing – books like Laurinda by Alice Pung and Welcome to Oprhancorp by Marlee Jane Ward stand out for me in their celebration of diversity in all its forms.

I really wish that books like these had been around when I was growing up, because it would have helped me cope with the cultural clashes I often faced as a culturally diverse young person, and made me feel a little less alone.

Zoya: Being able to see ourselves in the books we read is so important, because it means that not only do we feel like we’re included in our communities, but also that we’ll be understood by other people, and that our problems and experiences aren’t isolated.

At the same time, being exposed to experiences, identities and lives that are different from ours is crucial to helping us develop empathy and an understanding of diversity. It encourages us to be curious about the experiences of other people and the broader world around us.

Zoya: I think there are numerous benefits to the Stella Schools Program, but other than the biggest one – celebrating women’s writing and encouraging gender equality in our reading syllabuses – a key benefit is the celebration of Australian writing. I grew up reading mostly British and American writers, and I think that being exposed to more Australian women writers would have been amazing in terms of opening my eyes to a broader picture of the literary landscape.

I hope that, in the future, the Schools Program continues to expand in the ACT, where I live, and to have an impact in our public schools, in South Tuggeranong and West Belconnen in particular, where resources are often lower than in other areas.

Stella: What Australian authors would you recommend for young readers to get to know?

Zoya: I would highly recommend that young readers check out Emily Bitto, Hannah Kent, Alice Pung, Steph Bowe, and Maxine Beneba Clarke as a start! These writers have all changed my perspective with their work, opened my eyes to a different way of thinking, and provided hours of literary enjoyment.

Zoya: Keep doing it – and don’t be afraid to ask for feedback. One of the best things I did when I was in high school was writing two novellas and entering them both in a novella prize that ran at the time. Part of the competition was having my work read by a teacher, and the feedback I got was super helpful.

It’s always good to write, but editing our own work is often where we learn the most!