Skip to content
Stella > Explore > Sex in YA
Features 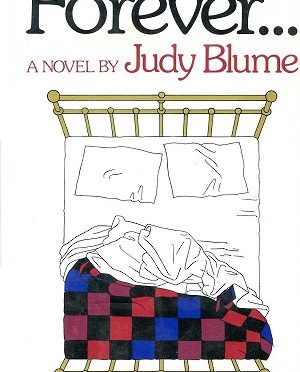 In her latest Stella Schools Blog guest post, writer and reviewer Danielle Binks discusses sex and taboos in YA. How far have we come since the release of Judy Blume’s Forever in 1975?

Judy Blume’s 1975 book Forever marked a change in young adult (YA) literature. From that book on, it became much more about reflecting real life to teenagers, and less about feeding them thinly veiled messages of morality. As Australian YA author Simmone Howell summarised on the 40th anniversary of Forever: ‘Judy Blume demystified first sex, took shame out of the equation and espoused the feminist ideal that a young woman can choose what she does with her body, and that a young man can respect this choice.’

With Forever, the readership left behind the puritanical (and largely American-influenced) ‘abstinence is best’ storylines. And as Blume explains on her website, the idea for the book came straight from the horse’s mouth: ‘My daughter Randy asked for a story about two nice kids who have sex without either of them having to die. She had read several novels about teenagers in love. If they had sex the girl was always punished – an unplanned pregnancy, a hasty trip to a relative in another state, a grisly abortion (illegal in the U.S. until the 1970s), sometimes even death. Lies. Secrets. At least one life ruined. Girls in these books had no sexual feelings and boys had no feelings other than sexual. Neither took responsibility for their actions. I wanted to present another kind of story – one in which two seniors in high school fall in love, decide together to have sex, and act responsibly.’

Of course, sex in YA can still be considered taboo – in America, books banned in schools and libraries are most likely to be contested for their sexual content. Closer to home, in New Zealand just last year, Ted Dawe’s award-winning YA book Into the River faced censorship (later lifted) partly because of the book’s sex scenes.

Earlier this year here in Australia, YA author Will Kostakis was booked as a guest speaker at a Catholic school in Sydney. The visit was cancelled a week after he came out on his blog. His recent novel The Sidekicks – which, like his previous book, The First Third, features a gay character coming to terms with his sexuality – was deemed to have inappropriate content.

This conversation took place amidst the debate around the Safe Schools resources, contextualising it within the broader political climate about what sexual content is ‘appropriate’ for teenagers.

YA literature serves a vital function in its facilitation of conversations about sex and sexuality. YA authors are painfully aware that the discussions about sex we see in political and public spheres can still be confusing to teenagers – especially for those who don’t fit into heteronormative narratives, and even for those who do. That’s why many YA authors take the responsibility to write about sexuality (particularly female) and sexual encounters very seriously, as these Australian authors explain:

Julie Lawrinson, on her book Losing It:

‘I wanted to write something funny and realistic about what sex is like for teenage girls. There were a few things that fed into that: I saw a lot of male writers talking to teenagers about their characters’ sexual experiences – sleeping with prostitutes, masturbation, awkward first times – and I thought, we don’t have an equivalent of this for girls. Also, there didn’t seem to be too many depictions of what sex is usually like for the first time for girls – which is, mostly, pretty ordinary. My daughter was a teenager at the time, and I was also interested in the questions and discussions she and her friends were having, their expectations, their anxieties. Also, I wanted to write the kind of book that I would have wanted to read at that age.’

Lili Wilkinson on her book Pink:

‘I wrote Pink because of a speech David Levithan gave at the 2007 Reading Matters conference. He talked about how growing up, he didn’t see himself reflected on library or bookshop shelves. And that while things were changing, the change was too slow, especially in Australia. I realised that while I’d read a handful of books about gay teens coming out, they’d almost all been about boys, and I’d never read a book about someone who just wasn’t sure. I wanted to write a book for my own teenage self that said – it’s okay if you’re not sure. You don’t ever have to pick a box to exist in, and you really don’t have to pick one when you’re sixteen. I purposefully set out to make Pink fun and funny. It’s not gritty or particularly sexually explicit. I didn’t want it to be a “problem novel”, instead I was aiming for a romantic comedy/journey of self-discovery. Nevertheless, the book was not without controversy. I was told by a few librarians in religious schools that they “couldn’t” have Pink in their collections. When I talked about it to school groups, I’d get sniggers and crude comments. Seven years later, this never happens. The change in students, teachers and schools has been amazing to witness. We’ve got a long way to go, but it’s clear to me that seeing queer characters in books and on screens not only helps IRL queer kids, it also makes us as a society more accepting, empathetic and proud of our diversity.’

Fiona Wood on her book Wildlife:

‘There’s a scene in Wildlife where Sibylla masturbates – she understands her own sexual pleasure; it’s puzzling that such a matter-of-fact aspect of female sexuality is still rarely written about. It’s important to me to present some positive representations of sex and sexuality to the readers. The sad truth is that casual sexism, objectification and crimes of sexual violence are permanent fixtures on the girl-radar. Misogynistic images and messages are prolific and unavoidable. Social media comes with its own set of problems. But fiction can offer some sane counterbalance: young women characters with agency, self-respect, and equal rights to pleasure, to initiating sex, to saying yes or no to sex. I want to show sexual experience in the context of individual identity, not as a stepping stone to happily ever after. I hope that a book like Wildlife gives young readers a chance to think about these things, ideally before they’re happening in real life.’

Alyssa Brugman on her book Alex As Well:

‘My novel Alex As Well has an intersex main character. When I wrote it, there were no YA books published by mainstream publishers with intersex protagonists. There were some novels that had transgender secondary characters, and a handful of adult books that had intersex characters. There are now a few YA books with intersex teens. All of my books so far have had friction between generations – friction and struggling and injustices, and a growing awareness of sexuality. This is what YA does well. Alex As Well is friction – struggling and injustice too – except with an intersex character. There aren’t many books about transgender, transsexual, transvestite, cross-dressing or intersex teens. Gender is so comfortably explored in music and other artforms. David Bowie, Freddie Mercury and Boy George were doing it several generations ago. More than half-a-dozen of Shakespeare’s plays feature cross-dressing teens. It doesn’t make any sense, does it? If one of the mainstays of YA is growing awareness of sexuality, how can this whole topic of gender be ignored by mainstream publishers? The feedback that I’m getting so far from readers is that, now that they’ve met Alex, somehow they feel that they should have read this story before. In fact, there was one reader who wrote something to the effect of, “So good to read a vegetarian character in YA”, as if that was the attribute that stood out. It seems to me, too, that these books should have been here all along. I hope that in years to come it’s common enough to be unremarkable.’

‘In Summer Skin I wanted to write about sex and desire from the female perspective. I’m so tired of stories presenting desire as being the “male condition”, with women or girls presented as passive conquests. Once you acknowledge female desire, everything changes. My mother always talked openly and honestly about sex, and I was a definite beneficiary of that, as were some of my friends. And then, at college, I was surrounded by girls who owned their sexuality. So it’s not like I discovered anything new, I just wanted to write about how things really are. Thanks to porn, girls are now being requested to do a whole range of things that – let’s be frank – aren’t always about their pleasure. My hope is if we talk more openly about this stuff, take the shame away, what’s left is a more empowered choice. Deciding to censor the discussion because it’s “safe” isn’t safe at all – not for the young adults you’ve just failed.’

Erin Gough on her book The Flywheel:

‘I wrote The Flywheel because I wanted to write a book that queer kids could recognise themselves in. We live in a world where we are so often told that straight is the norm and anything else is freakish and wrong. I wanted to call out that bullshit by showing how love and beauty and tenderness can exist within queer relationships. I wanted to do this through a queer main character who speaks to the reader directly – a character who is comfortable with her sexuality, has agency within the story, and whose point of view we are allowed to share – to show queer kids – to show everyone – how awesome queer love can be.’

Ellen van Neerven on her book Heat and Light:

‘Heat and Light features the stories of young Murri women who are finding their way through adolescence with family responsibilities, learning about culture, and exploring the abstract of the on country/off country divide. The book is about desire to belong, to have power, to be loved. I am glad this has become a book that is important to many queer readers, particularly to Aboriginal and Torres Strait Islander queer readers.’