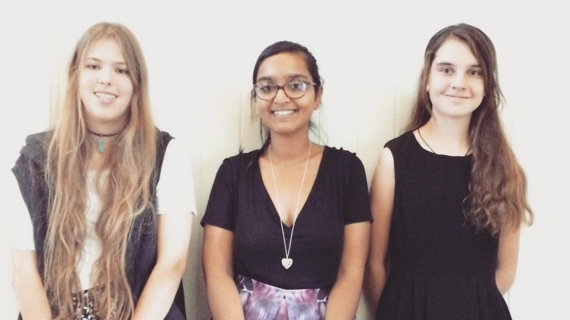 On the 17th of March the Stella Schools Program launched at Noted Festival in the ACT and announced the fantastically talented Zoya Patel as our NSW ambassador. We celebrated the launch with a panel discussion featuring Schools Ambassadors Simmone Howell and Steph Bowe, who shared their thoughtful responses to the theme of what women need to make it as a writer in the twentieth century. Stella also sponsored the inaugural ACT Secondary Schools Writing Prize, judged by Zoya, Steph and Simmone. The winning story ‘7 letters, starts with F’ was published on the Noted website and the Canberra Times, and we’re thrilled to publish it, with permission, below.

The light had dribbled through the dark green trees at her parents’ funeral, dappling her face in a golden pattern. Her emotions were confused, conflicted, exotic: a wild beast from an unknown land in a corner of the globe she did not know. She hadn’t known much then. Hadn’t thought she’d NEED to know much. If lives could be paved hers would have been carpeted in a royal red. An impressive colour, one demanding attention… “But not an original colour” she thought. She blinked, then squinted into focus a series of numbers, their complexity making her eyebrows reach to each other as if in greeting. Her nails tapped the desk, fingers that had once played the piano in front of her parents, smiling their approval at their 16 year old daughter’s “accomplishment”. And Oliver staring out the French window, fidgeting to be outside. Boys of 14 shouldn’t be trapped inside. They wanted adventure, not stifling protection.

Perhaps that’s why he’d joined up, the need to see the world. Perhaps peer pressure… Who was she kidding? There was nothing for him at home. Her? An older sister trying – failing – to fill the hole left jagged, bleeding since that day at the funeral.

She’d put on a facade of pride when he’d told her what he’d done. Angry pride. It was what he’d wanted. Yet inside she was fuming and envious. It should be her out there. She was older, braver, more determined. She was …a girl. Her whole life had been lived in a cage of glass bars, invisible but restrictive.

When her parents died, she’d felt like she was stumbling in a dark room. Blinded by grief. But she had also felt free. It had petrified her, that feeling of joy. A wild animal finding that its cage had dissolved in the night. The carpet laid before her, upon which she had been expected to walk her whole life, had been washed away. She had been free to make her own decisions. To make Oliver’s decisions.

But he had signed up. His pen scratching away at a promise to kill, to destroy: to sacrifice himself.

He’d boarded a train, and then a ship… “And then there was One”. One lonely girl to prepare meals for herself. To make decisions for herself. To ponder whether lonely grief-splattered freedom was worse than a loving imprisonment.

Father had always said that war was on the horizon, he’d seen things playing out in the inky scripts of his newspaper. “It’s inevitable” he’d sigh. Ironic that he and mother had died two years into the war he had spent so much time worrying about. Ironic he had left the world not knowing what was to come of this battle of mortals. He would die quickly in an unfortunate “gas explosion” leaving his children living in a flat the size of their old parlour room, carefully counting their every pound.

Back then, sitting at the sun-drenched, food-laden table she had never thought there could be a war like the last. Not one that would leave her hungry and separated from her brother. Certainly not one that would give her a once in a lifetime opportunity.

It was a Wednesday morning. The kitchen table was pushed under the window so the pathetic light could hit her newspaper. She’d been scanning for jobs for weeks now. 1942. Hitler’s eyes stared at her from the cover. That famous moustache looking as if it were attacking his face. As she stared into his eyes she wondered what Oliver was seeing. She shook her head and opened to a random leaf. “The Telegraph Crossword”. Absently she sucked at her pen and worked her way through the cryptic clues.

She’d always enjoyed puzzles as a child, always been good at them. Her pen sketched in letters, eyes flicking from clue to clue. Eventually the square was full of her small neat writing. An address was printed at the bottom of the page. Neatly, she ripped the page away from it’s brothers and folded it in an envelope. Who knew? Perhaps there would be a prize. She jumped at every opportunity to get a few extra pounds these days.

She hadn’t known it was a test. A test she’d passed. Her first days at Bletchley Park had been something out of her dreams. She had started with some low level administrator role, but she’d experienced a new emotion: fulfillment. For the first time in her life she was doing something to help The War. To help Oliver, wherever he was. To help herself.

Lunch time in her second week found her in the canteen; a lone figure amongst chattering women and girls. Quiet and serious, hair twisted back in the sober fashion. Aimlessly doodling digits on the table with a finger. It was then that an older woman had seated herself opposite; uniform neatly pressed, a set of round glasses pushed right up her nose. It was as if life was a constant surprise to her. The woman nodded and gave a sudden smile. Experienced eyes, reading deep into the young, impressionable ones. “Your eyes” the woman had said “you know more than the rest of them, I’ll bet. You see what they miss, don’t you?”

This had not been meant in a metaphoric way, as it turned out. She had been moved from the stuffy halls of the administrators to a room with no windows. A room for the coders. She sat now at a wooden desk, her equipment around her. Plotting her way through German codes, her finger nails drumming the table-top. In a time where the world tore itself apart and glued itself back together again every day, she had created a place for herself. A girl alone in the world, her family’s money no longer hers. Seated in a room that didn’t belong to her, but crowded with others like her, she had found a new carpet laid before her. She had found freedom.