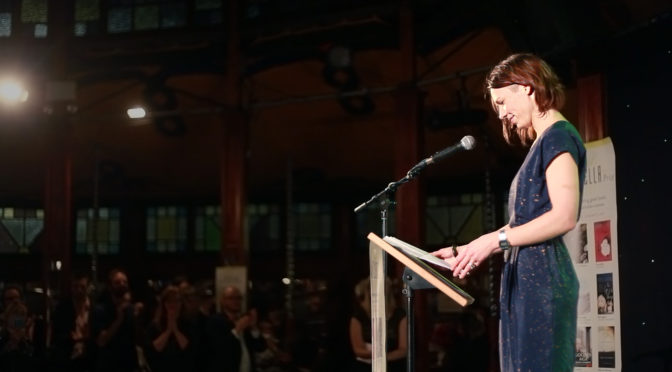 First and foremost I would like to thank the Stella Prize – the original vision of the organising committee, the current board, the wonderful staff, the generous donors and, of course, the judges – for this incredible honour and life-changing opportunity. As a debut writer, this is really is the most amazing thing that has ever happened to me!

Before anything else, I want to acknowledge the absolutely extraordinary talent of the women on both the long- and shortlists this year. These are incredible women, and their work is what’s making the Australian literary scene the rich and truly exciting place it currently is. Please join me in applauding these exceptional writers.

Next, I want to thank my partner, Hootan. Richard Ford wrote a list of 10 pieces of ‘advice to writers’ for The Guardian, and the first one was: ‘Marry someone you love and who thinks you being a writer is a good idea.’ I think the wisdom of that advice can’t be overestimated, and for women writers, I think, it is especially valid. Before even beginning to encounter the gender biases that one faces as a published writer, the home is the first battleground for women who want to write. As I’m sure we all know, women, statistically, bear the brunt of domestic labour, and having a partner who supports and values your writing enough to share that equitably, as well as providing genuinely un-resentful encouragement as you embark on what will most likely be a testing and financially unrewarding career is not just a bonus, but an absolutely fundamental necessity. So, thank you, Hootan, for making me feel like being a writer is a good idea, even at its hardest.

I have many other people I want to thank, but first I want to say a few words about why the Stella Prize, in particular, and its founding intentions mean so much to me.

The Strays was born out of a creative writing PhD that I completed at Melbourne Uni in 2013. The other half of that PhD was a research project and, in that research, I investigated the ways in which the figure of the artist, in the broad sense of creative practitioners of all kinds, is represented in contemporary western literature and culture. What became clear in the process of that research was the power and endurance of a particular myth of the artist, and of creativity, one that came to dominance during Romanticism but that still has a firm hold today. Basically this myth says that the true artist not only produces exceptional works of art but is characterised by an exceptional nature, and is ultimately above the ordinary run of humankind.

Women, with their association with the ‘too ordinary’ realm of the domestic, have historically been excluded from the category of artist. If they did produce works of literature, or visual art, for example, they were referred to as dabblers, hobbyists, craftswomen, or by that damning term ‘lady novelists’. But more than that: there was seen to be something essential about femaleness that was anathema to creative prowess, and women who did obtain success were often considered to have lost their femininity in the process.

As recently as 1962, the English sculptor and academic Reg Butler asked the following rhetorical question in a public lecture: ‘Can a woman become a vital creative artist without ceasing to be a woman except for the purposes of a census?’

For anyone who makes the choice to dedicate their life to creative production of any kind, it’s bloody hard. But to know that, simply because of your gender, you are statistically less likely to win the prizes and get the critical recognition that are a large part of enabling writers to have a somewhat sustainable career, is quite maddening. A lot of my thinking about the figure of the artist and the creative life found its way, in a much less academic and didactic form, into The Strays.

So, for someone who has thought about this stuff – a lot – there is no prize I would rather have won than the Stella Prize, a prize born out of a recognition of the gender imbalance that still, quantifiably, exists in the literary world, and that attempts to redress that imbalance.

I can’t even begin to measure the benefits that this prize will bring in terms of my career as a writer. But I do know that the prize money will give me more than a full year in which I will be able to just write, and I cannot express how precious that is. I dearly love the Stella Prize for what it is giving Australian women writers, and for the way it has made such a proactive and audacious intervention in the Australian literary world and general public discourse.

On the subject of prize money … The first two Stella winners, Carrie Tiffany and Clare Wright, generously gave away a portion of their prize winnings: Carrie to the other shortlisted writers; and Clare to the Indigenous Literacy Foundation and to founding a women’s history prize at her local public high school.

Now, as the third winner of the prize, I feel myself to be in an interesting position. If I choose to publicly donate a portion of my prize money, I will really cement the precedent set by Carrie and Clare. On the one hand, I don’t want to create what could be felt as an oppressive obligation for future winners, in a context that is meant to be about alleviating the constraints and pressures women face already. On the other hand, I think it’s a fantastic precedent. There are a number of organisations whose work I passionately believe in, mainly those that focus on the environment and animal rights. The way humans behave towards the non-human world, and particularly animals, is something that absorbs and horrifies me on a daily, hourly basis. I’ve thought a lot about this, and I’ve made the decision to donate a portion of my prize to the Wilderness Society, whose work I think is of absolutely vital importance.

Now, finally, I just want to thank a few people who are very important to me. My PhD supervisor, Kevin Brophy – the first reader of The Strays, and such an intelligent and generous reader and mentor. Affirm Press, who gave The Strays a home, and have been so supportive and an absolute joy to work with. My agent, Clare Forster of Curtis Brown, who has my back.

I’d also like to thank the amazing Melbourne writing community that I feel incredibly lucky to be a part of. It’s talking to other writers that makes this whole caper actually feel good and fun, and I’ve experienced such warmth and generosity, from both established and emerging writers, as I’ve started out. Thank you especially to Antoni Jach and my little Masterclass gang. And to Michael Gawenda, Helen Garner, Kalinda Ashton, Claire Thomas and Maxine Beneba Clarke, among many others.

Finally, I want to thank my family and friends. Especially my parents, who, amazingly, also seem to think my being a writer is a good idea. My mum, Pam, who read to me every night when I was a child. My dad, Peter, who taught me that everyone around me has an interesting story, if you just listen. My stepdad, Alan, and stepmum, Sandra, who have given me so much love and encouragement. My aunt Annie, who taught me about art and showed me how to look at the world in an observant, alive manner. My brother and sister, who I adore.

And I want to end by thanking my friends – particularly my female friends. At its heart, The Strays is about female friendship, and I can’t express enough gratitude to the women in my life, whose solidarity and friendship and conversation are just the best things in the world.

Here’s to female friendship. To women supporting other women. Here’s to the Stella Prize!

– Emily Bitto, winner of the 2015 Stella Prize for The Strays