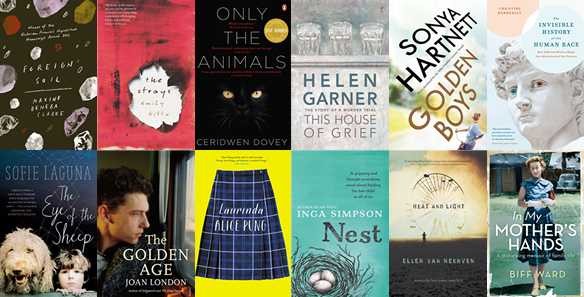 The Stella Prize celebrates Australian women’s contribution to literature. It was awarded for the first time in 2013 to Carrie Tiffany for Mateship with Birds. In 2014, the winner was Clare Wright for The Forgotten Rebels of Eureka. The prize is worth $50,000, and both fiction and nonfiction books are eligible for entry. In just two years, the Stella Prize has already become a fixture on the Australian literary calendar, significantly boosting book sales and raising author profiles. Last year, the Stella Prize also launched a new education initiative, the Stella Prize Schools Program.

The books on this year’s longlist range far and wide, demonstrating the diversity and power of Australian women’s writing. Works by established and highly regarded writers such as Helen Garner and Joan London sit alongside books by exciting new voices and emerging authors; the list includes three debut works, and five books by authors under the age of 40.

The 2015 Stella Prize longlist is:

Chair of the Stella Prize judging panel, Kerryn Goldsworthy, says of the longlist:

“For the third year in a row, the longlist for the Stella Prize reveals the wealth of talent and skill across a broad spectrum of authors, genres and styles in Australian women’s writing. Of the twelve writers whose work appears on the longlist for 2015, almost half a century separates the youngest from the oldest. Some of these writers have just published their first books, while others are experienced veterans of the Australian literary scene. The list includes science writing, short stories, reportage, novels, memoir, and fiction for young adults. Some of the books focus on animals and the natural world, some on children, and some on the things that order our human lives, from the dramatic moral theatre of the law courts to the tiny complexities of DNA.

“The exercise of power is a recurrent theme: the power of one race or class over another, of humans over animals, and, most of all, the power of adults over children. The vulnerability of children and the harm that can befall them is a particularly strong theme running through the list, and there’s a kind of symmetry in the fact that, this year, the longlist for a women’s prize should feature several books about boys and boyhood. This year’s list is best summed up in the words of one of the few female winners of the Nobel Prize for Literature, Chile’s Gabriela Mistral, who won the prize in 1945: ‘We are guilty of many errors and many faults, but our worst crime is abandoning the children, neglecting the fountain of life.’”

“In 2015 the Stella Prize judges have selected a rich, varied and vibrant longlist of books that in their eyes fulfil the judging criteria of “excellent, original and engaging”. It is so pleasing to observe not only the range of genres, forms and subjects covered by this longlist, but also to witness established writers at the peak of their powers sitting alongside younger and debut authors who are just setting out on their writing careers.”

Watch nine of the longlisted authors read from their remarkable books in this video of our special online event, Presenting the Stella Prize Longlist.

To request an interview with Stella Prize Executive Director, Aviva Tuffield, Stella board members, 2015 Stella Prize judges or any of the longlisted authors, please contact: