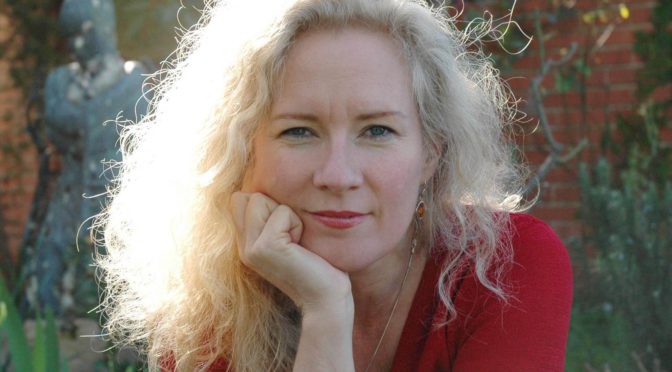 The Stella Prize chats with Kirsty Murray, award-winning author of books for children and young adults, and a speaker with the new Stella Prize Schools Program

Kirsty: In my entire secondary schooling, I never studied a book by a woman. When I was in my teens, it seemed to me that only men wrote serious books, or at least that books by men were the only ones that were taken seriously. I was a bookworm and read obsessively from when I was in primary school. I loved nineteenth-century female authors – like the Brontës, Jane Austen, Elizabeth Gaskell and George Eliot – but the whole idea of a woman’s experience being of more interest than a man’s was questionable. It seemed to me that the really important books were all written by men. All the books I studied in school were by men, and most of them had few female characters.

At my secondary school, set texts included Man-shy by Frank Dalby Davison, The Purple Plain by H.E. Bates, Lord of the Flies by William Golding, Animal Farm by George Orwell, Far from the Madding Crowd by Thomas Hardy and several plays by Shakespeare. Even the poets we studied were male. When I was eighteen, I told a journalist friend that my favourite writer was the French novelist Colette and she laughed at me for being interested in such an ‘insubstantial’ writer. Real books were written by men.

Stella: Are there any books you wish you had read when you were younger, but weren’t introduced to?

Kirsty: I wish I had been encouraged by my teachers to read women writers specifically, to seek them out and to consciously question my reading. I wish someone could have unpicked the quiet assumptions I had about gender and fiction. I was very lucky to have parents who read widely and provided me with a vast array of fiction, but at school I was taught that the author heroes of the twentieth-century were all men. Twentieth-century female writers seemed wishy-washy in comparison and prone to suicide (Virginia Woolf, Sylvia Plath, Charmian Clift).

It wasn’t until my mid-twenties, when a friend introduced me to Fay Weldon, that I realised I hadn’t read any female authors in over a decade. I made a vow to read nothing but female authors for a few years, especially contemporary writers, to make up for the gap in my reading. I discovered a whole world of spectacular literature – Margaret Atwood, Jane Gardam, Maxine Hong Kingston, A.S. Byatt, Amy Tan, Margaret Drabble, Alice Thomas Ellis and a host of Australian female writers that I’d failed to read when I was younger such as Ruth Park, Henry Handel Richardson, Miles Franklin and Kylie Tennant. Despite loving all these writers, it wasn’t until I began to write professionally that I came to understand how gender dynamics influenced the way books are written and received.

Stella: How did your interest in writing develop over time?

Kirsty: I was lucky to be constantly encouraged to write by my family and my teachers. I always assumed that I would somehow, eventually, become a professional writer by hook or by crook. When I finally began writing for young people, I was worried about engaging male readers and influenced by the rhetoric that boys were reluctant to read books with female protagonists. I fell into the tired old idea that girls would read anything but boys had to be coaxed into a book, and as a result my first two novels had male protagonists. When my teenage daughter pointed out I’d already written two novels about boys, I started to question my assumptions.

Once I had I finished the draft of my third novel, Walking Home with Marie-Claire, I gave it to a group of teenage girls to read. It was an intensely female story about seminal thirteen-year-old experiences, including girls practicing kissing on each other. My teen readers and I were on an annual camping holiday with a group of families that included dozens of teenagers. Worryingly, when the girls finished reading it, the manuscript disappeared. None of the girls could find it in their tents. I was frantic and searched the campground until finally, in one of the tents I found a group of eight boys lying on their sleeping bags handing around the pages of the manuscript and reading out the ‘juicy bits’ to each other. ‘Do girls really do this stuff?’ asked one of the boys. It hadn’t occurred to me to ask the boys for their opinion of the manuscript, but their reactions to it made me realise how rarely boys are given permission to read about the secret lives of girls.

The more I wrote, the more I visited schools and met young readers, the more I came to see the prejudices that female characters, female authors and female readers laboured under and the barrier that kept male readers from accessing their stories.

Kirsty: I have written eleven novels. Four have male protagonists, six have female, and one novel – Vulture’s Gate – is evenly split, told from both the boy and the girl’s perspective. It’s set in a future where women are extinct and the last girl in the world goes on an epic journey with a brave and resourceful boy. Of all my books, it’s the one that most deeply questions gender stereotypes. Hopefully, it raises more questions than it answers.

Many of my books are historical fiction. I’d like to think my readers gain a sense of where they fit in the time–space continuum and an understanding that all human experience is interconnected. If students could gain one thing from reading any of my books, it would be to be curious about everyone, regardless of gender, age or race.

Stella: What do you hope the benefits of the Stella Prize Schools Program will be for students?

Kirsty: Gender stereotypes restrict our reading and how we live our lives. Teenagers, especially, can feel trapped in a straitjacket of destructive expectations. I hope the Stella Prize Schools Program will help students develop a deeper sense of what it is to read critically, and also encourage students to question their own bias and open up a whole new world of pleasure in reading.

The programme has so much potential to give readers the courage to cross the ‘pink frontier’, to escape the ghetto of narrowly gendered reading that keeps readers from enjoying the full richness of literature, the many voices and perspectives that good fiction embraces. I hope the programme also helps students understand the importance of questioning everything, especially the ideas that are so embedded in the weave of our daily lives that we don’t even notice them. For male readers, I hope the program enriches their lives by giving them a deeper perspective into the lives and minds of half the world population. For female readers, I hope they question their choices and understand the importance and power of the female voice, and that meeting female writers and reading their work gives them the courage to tell their own stories without inhibition.

Stella: Is there one book you think all young people should read?

Kirsty: I’m not a fan of the one-book theory. It’s a little like saying there is one piece of clothing that everyone should wear, whether it suits them or not. There is a perfect book out there for everyone, but each and every reader must find that book for themselves. That said, reading world mythology is a great way to understand the first stories that humans told each other to make sense of their lives. A fairytale, myth or legend a day keeps the imagination firing.

Kirsty: Read. Everyone says this, because it is the single most important discipline that writers must cultivate. Put time aside every day to read deeply and seriously. Read outside your preferred genre. Challenge yourself as a reader. There’s nothing wrong with ‘comfort reading’, but if you want to write well, you have to read widely. There is no more serious commitment a writer can make to their craft than to read boldly. No matter how many creative writing classes or workshops you attend, no matter how much you study, there is no better teacher than a library of good books. Every reader needs to question what they read, and to examine the way not only gender but all power structures are represented. Many authors present the world as being a certain way and imply there is no changing it. The world, like a story, is a malleable thing and the stories we tell ourselves about it affect the way we understand it. By reading many different perspectives you can see the world as it truly is, and not through the foggy lens of tired assumptions.