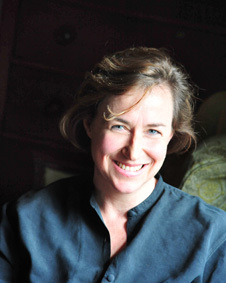 The Stella Prize chats with Cate Kennedy, 2013 Stella Prize-shortlisted author of Like a House on Fire and a speaker with the new Stella Prize Schools Program

Stella: What were your favourite books as a child and a teenager? What shaped your reading habits?

Cate: I read everything I could get my hands on as a child– everything from the Famous Five books to Harriet the Spy. I was very attached to pony stories, then as a young teen stumbled, via C.S. Lewis, onto Ray Bradbury, who wrote with a lyricism and intensity that I loved, and still do. I read thousands of pages of horror, science fantasy, and espionage thrillers as a bored teenager, then finally, at college, read Peter Carey’s short story collections. It was the short story form which led me onto a very belated interest in Australian women writers, so much so that I undertook a post-graduate degree studying the narrative patterns in novels by Australian women published in the ’70s and ’80s.

Cate: We studied only male writers at my school, to my best recollection. The omissions now seem absolutely glaring (studying the poetry of Ted Hughes, for example, but not Sylvia Plath) but then again I did go to a school run by nuns, who chose – for a secondary girls-only school of over a thousand students – a rousing school song called ‘Be a New Man’. I wish I were joking.

Cate: I wish we’d had access to To Kill a Mockingbird while I was at school, just for the complexity of the story and the fact that it was by a young woman in her twenties – I would have liked to hear the nuns discuss that one. And I wish I’d had access, as a teenager, to a quarter of the fantastic young adult books being written today. I really cannot recall studying a book that was by an Australian female author, set in contemporary times and about contemporary concerns, until someone gave me Monkey Grip while I was at college. In the world I was in, books by Australian women just did not exist. We read Newbery Medal winners from the 1960s and dog-eared copies of I Am David. Nothing wrong with that in itself, except that like all the television we were watching, every text was set in a different culture and a different era from our own.

Stella: How did your interest in reading and writing develop over time? Was this encouraged through particular teachers, educators or mentors?

Cate: I had a fantastic librarian in primary school who was also a family friend. She was married to a terrific teacher and both of them were incredible mentors to me as a child and young adult. In fact, they still are. They’re now my daughter’s godparents, and they gave her a bag of books just the other day which she’s currently devouring. When I was a lonely, bookish kid in primary school, this librarian gave me the job of writing book reviews of each book I read from the library, and she arranged each page around the library into segments of a giant ‘bookworm’. Such a small, empathic thing to do – such a slow-burning, far-reaching fire to light under me.

Cate: There’s a brilliant poem by US poet Billy Collins called ‘Introduction to Poetry’ in which he laments the way poetry is taught in schools. He wants students, he says in the poem, to hold the poem up to the light like a colour slide, or water ski across its surface, waving at the author on the shore. He makes a whole list of wonderful sensory analogies about emotional connection and enlightenment. But all they want to do, he comments wryly at the end, is tie the poem to a chair and beat a confession out of it.

That’s one of the problems, to me, about the way we study and analyse a story in a classroom context. I don’t want students to see the process of writing, reading and discussing stories as onerous, tedious or stressful. All you want to do in writing a story is to give someone the jolt that something in the world has given you, and to hopefully have your story work as a jolt to anyone in the class who might think about writing a story themselves sometime. I also want to keep writing about ordinary people in familiar, plausible scenarios, so that my subject matter can seem recognisable and believable to Australian students and allow them to project themselves into the interior lives of fictional characters, which is a very powerful experience for adolescents, I think.

Stella: What benefits or experiences do you hope students will gain from the Stella Prize Schools Program?

Cate: I would like to see a range of texts which are excellent and diverse, and which confront, in students themselves, their own reading biases when it comes to gender. I think the gender of authors and characters should be part of the discussion, and should enrich the analysis. Literature, like much of what we study at school, should function as a prism through which we ultimately gain self-insight. When this is not the case, the classroom can be a sterile place to discuss what books are about and how they’re influencing our ideas. I never had an author come and speak to me at school, or any other artist for that matter. I never met an adult who spoke articulately and with passion about making stories, and why they did it, and the ideas that drove them. As an adult, I sorely missed this as I tried to conceive of myself as someone who wanted to pursue writing as a vocation. So I guess I want to try to convey that now, in any visits I’m able to make to schools as part of the Stella Prize Schools Program.

Stella: What book do you think all young people should read?

Cate: I don’t think there’s one text that’s going to speak to everyone. I think young people should be encouraged to write themselves and talk about the process of trying to write with each other. In-class critiquing of your work on its own can easily lead to excruciating self-consciousness.

Cate: Try to keep your creative life separate from what happens in the classroom. You need to find your voice without it being co-opted by assessment. Keep it private, and secret if it lets you write more freely. Don’t analyse or overthink it, and don’t let anyone give you a ‘theme’ you have to write to. Just get those burning thoughts and ideas and preoccupations out and onto the page, until the great day down the track which is waiting for you, when you will stop writing to express your emotions and will want to write to affect someone else’s emotions. The day you look at what you’ve written with a view to making someone else laugh, cry, think or reflect, is the day you stop ‘aspiring’ and start becoming the writer you are.