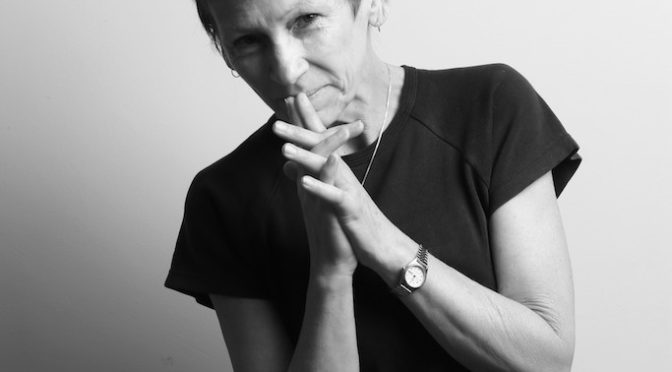 Kristina: There isn’t one favourite, rather a constellation. My sister, my daughter, a clutch of wonderful friends. But if we’re talking remarkable women, I’d have to say Debbie Kilroy and Anne Warner, CEO and president of Sisters Inside, which advocates for the human rights of women in prison. I’m lucky enough to be on the management committee, and get to watch these two fearless women fight tirelessly for what they believe in: that prisons are a modern version of slavery, that they don’t work. These women are strong, compassionate and afraid of no one. I learn from them daily.

Kristina: Fourteen is such an awkward age. Or at least it was for me. Caught between the child and the woman, I didn’t know who to admire, or how to choose. My sense of self was too tenuous. I did admire and look up to my big sister Sharon, who seemed impossibly grown-up and brave and sophisticated, and my cousin Juls, so cool, so different to me: while I sat frowning over a notebook or writing for the school magazine, she was hitching up the coast with boyfriends, surfing, wearing very short skirts and cork heels. They are still among the women I admire and am grateful for.

Kristina: I walk. Every day, to straighten my head, crystallise thoughts, for the joy of watching the sun come up over river or hill. Whenever I can I walk for days, preferably alone. In February I hiked the Queen Charlotte Track in New Zealand, and I’m planning the coast-to-coast path in northern England later this year. Apart from that, my favourite downtime is hanging with my three small grandchildren. Nothing grounds me better, or gives me such unfettered happiness.

Kristina: I often tell people that writing chose me, not the other way round, and that’s how it feels: that I had very little say in it. I remind myself of this in the very good and the very bad times. In between, in the long months and years of writing a book, it is of course a conscious choice to go to the desk every day, to stay away from the internet and other distractions – washing and cooking are favourites – and to push pen across paper. But that’s only the first hour or so: when you’ve dug the ditch deeply enough, and something happens there on the page, it’s like falling in love. I’d choose it again and again and again, every day, week and year.

Kristina: I’ve moved around so much over the past fifteen years or so that I have to be flexible. A kitchen table, a desk in a bedroom, the local library. I’ve also had the great good luck of staying several times at Varuna, the Writers’ House, at Katoomba. As any writer will confirm, there is writing energy, or magic, in those walls that once housed Eleanor Dark. No distractions – except the fabulous food and the fine company of other writers at night. The work simply gets done.

Kristina: Across several continents and climates ­– Sweden and Norway, the north of England, the south island of New Zealand. Inner-city Brisbane or Adelaide. A beach somewhere. In all of these places except the last, there is a community of family or friends who represent the idea of home for me. And the sea is a friend in itself.

Kristina:  Yes: from the Australia Council Literature Board, from Arts Queensland, from Varuna, as well as a Queensland Literary Awards Fellowship. I’m grateful for each one, and for the writing they’ve allowed to progress by removing (or partly removing) the need to work full-time to pay the bills. It’s always a tricky equation: how much do I need to earn to get by, against how much writing gets done, against what I can live without. The writing always wins. So hair cuts, meals out, new shoes, a better car, that gorgeous new backpack I covet – they all lose. It’s a fair deal though, for what I gain.

Stella: Are you part of a writing group?

Kristina: Only one, and it’s close to my heart, though we meet only sporadically. Its members are mainly women exiting prison or living on the margins in some way, colliding occasionally – or trying not to – with the criminal justice system. We get together when we can, in a variety of places: a library, a gallery, a park, or over coffee. We all leave those meetings feeling positive, uplifted and optimistic. I also have a writing buddy, Mary-Rose MacColl; we exchange manuscript pages once a week or once a fortnight and meet over coffee for robust discussion and critique. We’ve been doing this for years, through several books of hers and several of mine. These days we often skip the pages and walk over Mt Coot-tha instead. Then we have coffee and tell each other to get some writing done.

Kristina: Map. Just three letters, so simple, but it evokes whole worlds for me, on old-fashioned paper (or parchment!) unrolled on a desk or unfolded in a field or a car or on a track or hillside. The pale colours of schoolroom maps, the contours and grids of ordnance maps, the idea of finding your way, and not by some digital device but by these marks on paper. Stories are maps too, of lives and thoughts and cultures. For me they’re like a breadcrumb trail: we tell them and listen to them to find our way home.

Kristina: Tim Winton says you don’t finish a book, you give up on it, and I agree, for the most part. They’re never really finished, ever; left to ourselves most writers would probably tinker and fret over a story for a decade. But I suppose the best it gets for me is when the question I began with feels more or less answered. It never can be fully; not in my experience, anyway. New questions open up. It really is as they say it is: the more you know, the more you don’t know. The more I write, the more comfortable I am with uncertainty.