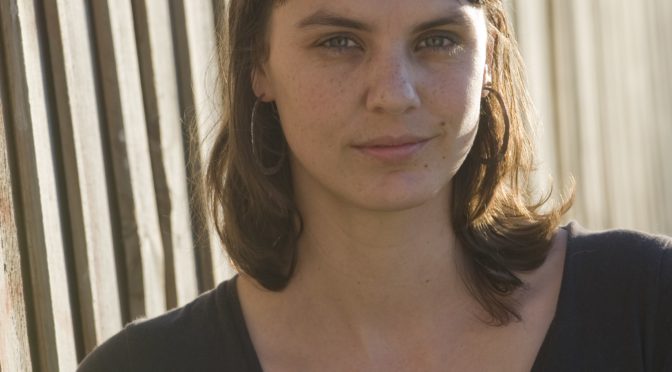 Anna: I wish I could say someone really profound and inspiring but at fourteen I was admiring of some pretty average qualities. I’d admired a friend’s ability to buy alcohol without using fake ID, another who could score pot, and so on. That’s not to say I was an entirely superficial teenager but I can’t recall having any memorable role models at that age.

Anna: I swim. In amid the floating Band-Aids, people picking their bums, dimpled thighs and children filling their swimming nappies, I usually find my peace swimming at the local pool – though sometimes I do get the odd bout of lap rage. I can’t stand it when men – and it’s always men – don’t launch off until you’re mid-turn and about to take off yourself. A communal lap lane is all about timing and settling into a rhythm with the other swimmers. I also like gardening in my undies. And when I’m particularly exhausted, eating cereal for dinner, and going to bed early, the cat curled up beside me, and reading.

Anna: I usually reply to this question that I can’t actually do anything else – but that’s not entirely true. I am a pretty good waitress. I’m not a bad teacher. And I love getting all serious and caring in a First Aid situation. But I’m a writer and I’m not really sure how it turned out that way. I don’t remember ever saying ‘That’s it, I want to be a writer!’ When I was seven, I wanted to be a potter, then a Christian and finally a farmer, all of which my family thought was hilarious. After that, I didn’t seem to have any career aspirations – and it’s interesting because around about the same time, my teacher noticed that I’d managed to sneak through school so far without learning how to read. She quickly bundled me off to this little old lady who made animal brooches out of FIMO and she taught me how to read (turns out I’m quite the fan of private tutorials). Armed with a FIMO rabbit brooch, it was like a whole new world opened up and swallowed me. I simply disappeared into books.

Anna: Of course I do! Show me someone who says they don’t and I’ll bet you cash I can prove otherwise – that is unless they were brought up by wolves and then they’d be concerned about what wolves think of them. The conundrum in my gig however is where to draw the line. Journalism is often about investigating what other people think, or at least what they say they think and whether their actions correlate, but when it comes to writing up what you’ve discovered, you cannot let yourself be hampered by other people’s perceptions. It’s not the job of a writer to make friends, or to keep friends. My obligation is to the truth of the story and that’s what I have to remind myself over and over when I start worrying about people’s reactions and feelings. That’s not to say a journalist should therefore stomp all over those sorts of sensitivities − but it must never restrain them from telling it as it is.

Anna: Not really! I write on the couch, or in an armchair, with a length of extension cord hanging over the back, a pillow underneath my laptop, a bottle of water tucked in tight between my leg and a cushion, a stack of dirty dishes building up beside me on the floor.

Anna: At the moment, ‘margarita’ seems like a pretty magic word – but that’s just because I’ve done 29 months straight of incubating, breastfeeding, incubating, and looking at a further ten months of breastfeeding before I’m allowed one! But jokes aside, in all honesty I used to love words for words’ sake, for their linguistic beauty, but that’s not really the case anymore. I love words for what they can do, what they mean, and more often than not, it’s the plainest words that can say the most.