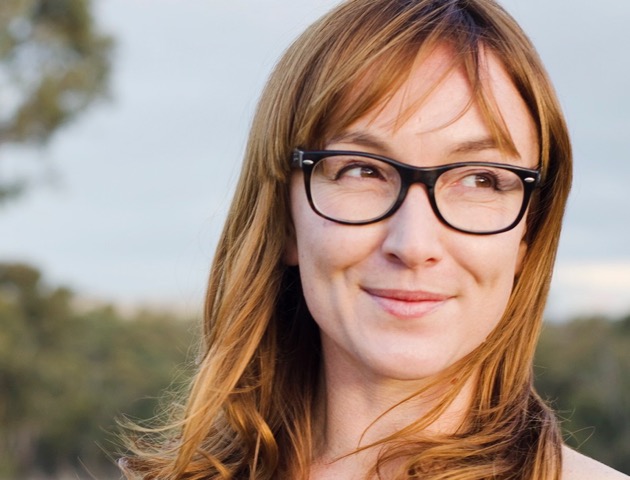 The Stella Prize chats with Courtney Collins, author of The Burial

Courtney: At fourteen, my greatest admiration was for my best friend. In my eyes she was fearless. At about thirteen she decided she was bored with being a girl. She wanted to be a boy. She chopped off her hair, wore cut-off jeans and t-shirts and began skateboarding about. On Saturdays, we’d walk up and down the main street of the country town where we lived and make our lets-get-the-hell-out-of-here plans. I suppose we looked like boyfriend and girlfriend. It was not an issue for us. Except waiting outside of men’s toilets for her. I always counted the seconds until she reappeared. And the times she drove around at night in her mum’s car, while her mum was out. I just held my breath and watched on with a mix of admiration and fear.

Courtney: I live next to a billabong and a river. When it’s warm enough I throw myself in. Now it’s getting cooler, I go for a walk and throw rocks in the paddock.

That’s until you make a place for yourself, a place only you can occupy. I aspire to that.

Courtney: I have always wanted to be a writer. I have always written. There was never a fork-in-the-road decision to make. I just followed where writing took me and when I had to make money doing other things, I called it ‘research’. Sometimes it has felt like a circuitous route but I always came back to it. I love every little thing about it, be it coloured pens, paper, desk, window, laptop. Everything except sitting. I’ll never love that.

Courtney: In terms of my writing, aside from people’s indifference, which doesn’t really count, there can be one of two scenarios:

1. You loved it? Great! (You’re clearly a person of good taste.) Buy me dinner!

2. It ticked you off? How interesting. (Are you an idiot?) Buy me a drink!

I’m being facetious but I’ve been writing for longer than I’ve been published so my relationship to the work is my own. In writing a novel, or anything, I begin with an intention and aim to fulfill it. I hold the intention close to my heart and tell no one. This has never been a problem because while people aren’t shy in expressing their opinion, they rarely ask what your intention was.

But there are a group of people whose opinion does matter to me. It matters very much. My publisher and agent are among them. It’s a thing of trust.

Courtney: When I was writing The Burial I worked from an old postmaster’s cottage which is where I have lived on and off for about seven years and over the last two years, more or less full time. I broke the monotony by cycling into town to work out of a cellar door that my friend who is a winemaker leant to me. In that process, I could make sense of the heat and the dust, and all the various creatures scuttling about, because that was very evocative of the novel’s setting. So for that reason, it was the perfect place.

But I’m working on another novel now. It’s set in 1992 and it requires a different energy. I am finding that the old grid does not apply. It won’t have me. I’m doing a lot of travelling this year with The Burial so I am learning to write ‘on tour’. This means the little rituals around writing become more and more important, like travelling with a teapot and turning it three times. I find small ways to create a sense of a good writing place, wherever I am.

Courtney: The best residency I have ever experienced is a place called Hedgebrook Women Writers’ Retreat on Whidbey Island in the Puget Sound near Seattle.

It is supported by an incredible group of people including Gloria Steinem and Alice Walker. It was started by philanthropist Nancy Skinner Nordhoff.

Nancy had heard that the writer Tilly Olsen wrote her novels in a public library. It got her thinking about the challenges that working-class women face in trying to find a space of their own. When I met Nancy at Hedgebrook she said, ‘It just would have been a real shame if Tilly hadn’t written those books.’ It inspired her to buy a beautiful tract of land on Whidbey and build cottages for women to write in, cottages that are straight out of a writer’s imagination.

The writing desk takes up half the room and looks out to a lush woodland where you might see a deer spring out. At the end of the day, you climb up into a little loft bedroom that is heated by a wood stove below. Every meal is cooked for you out of the Hedgebrook garden, and in the evening the staff send you off with a basket of homemade things – brownies, blueberry cornmeal muffins. You could grow really fat there.

It was off-the-scales nurture that initially I found hard to take. After my first meal there, which was fit for a wedding banquet, I went to clear the plates. The cook, a rather foreboding woman, stood with her hands on her hips and said, ‘Put that down. You are not here to clear the plates, you are here to write!’

I hear her voice often, ‘You are here to write!’

Courtney: Saudade is a Portuguese word and there is no translation for it.

I first heard it when I was travelling in Portugal about 15 years ago. The way my Portuguese friend explained it to me was that a girl might say to her sweetheart, ‘For now, I give saudade your name.’ In saying that, she acknowledges that this thing ofsaudade, this eternal longing, actually belongs to her. That seems true to me. To give it someone’s name is only a temporary thing.

For me, there is nothing more energizing than creating a new setting, both in fiction and in life. There’ll always be more questions, and the questions will always find you.