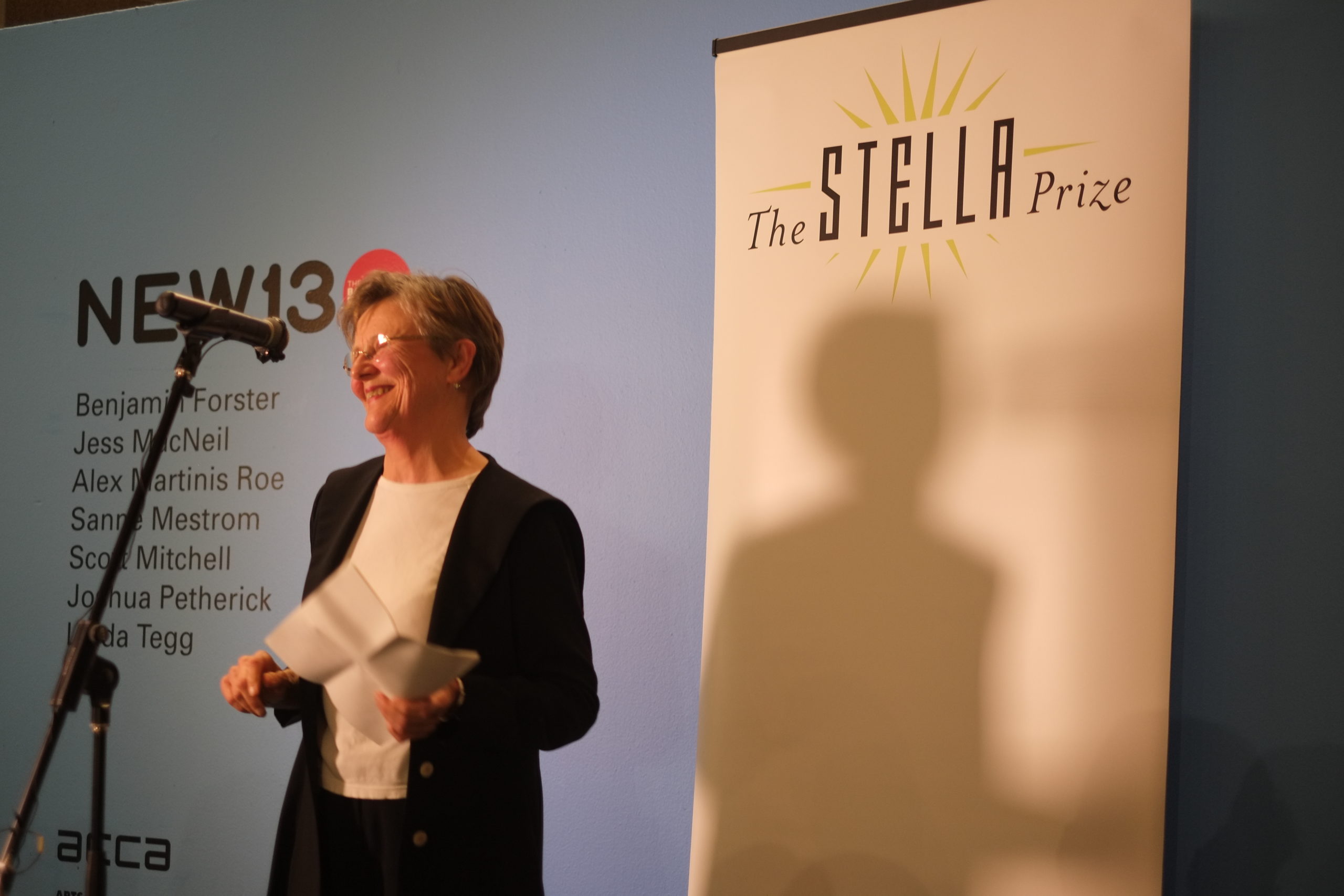 The highlight of our extraordinary inaugural Award Night was the speeches.

HELEN GARNER gave a brilliant keynote speech, a version of which can be read here

“I don’t think I’ve ever been more excited to be at a literary award event – and I’m not even going to win! The discussions about setting up the Stella Prize began just over two years ago, and for quite a while all the Stella Prize referred to was a group of women sitting in a room and chatting – usually in Readings boardroom, so thank you to Mark Rubbo and all at Readings for lending us that space in which to dream big.

And look where dreaming gets you: here we are standing in this beautiful gallery with all SIX of the Stella Prize’s shortlisted authors present, a few of the longlisted ones, some of our judges, and so very many of our invaluable supporters.

My role here tonight is to offer thanks and deserved recognition to the people who have made the Stella Prize possible. First and foremost I want to thank our founding patron, Ellen Koshland, who shared our vision and passion from the outset, and without whom we genuinely would not be here tonight. I want to thank our other key donors, Joanna Baevski, Patricia O’Donnell, Lee Liberman, Cassy Liberman, and Michelle Garnaut.

I also want to thank all those generous people who gave us seed funding early on so that we could get started, and all those wonderful people who met with us and gave us advice, and took our calls, and offered support.

I would like to thank our incredible Stella Prize judges: Kerryn Goldsworthy, Kate Grenville, Claudia Karvan, Fiona Stager and Rafael Esptein, who worked so hard and took their roles so seriously and came up with such a thoughtful and distinctive longlist and then shortlist.

I’d like to thank our Stella Prize Ambassadors and all of those writers who either excelled or humiliated themselves when taking part in our Stella Prize Trivia Nights. And I particularly want to thank Helen Garner for graciously agreeing to be our ‘guest speaker’ tonight.

I need to thank two freelancers who have gone beyond the call for us: designer Susan Miller, and marketing co-ordinator Sarina Gale. And most especially our web maestro, Virginia Murdoch.

The Stella Prize has been incredibly lucky to have had two remarkable women work for us on the administrative side of things. Firstly, Claire Smiddy, who got our systems up and running. And since October the fabulous, dynamic Megan Quinlan, who is our Prize Manager. Megan could not have worked harder to ensure the success of the inaugural Stella Prize. She really has done us proud.

And I need to thank the Wheeler Centre and its staff, who kindly offered Stella a home in its building. And also the staff of the Melbourne Writers Festival who housed all the book entries as they came in – and that’s quite an undertaking given that we had almost 200 entries and required 6 copies of each book.

I’d like to acknowledge all my fellow Board members as this has been such a team effort. Well done, team Stella. And we’re grateful both to the Australian Centre for Contemporary Art, for being our venue sponsor tonight, and to Brown Brothers for supplying the liquid refreshment you’re enjoying.

And last but not least, thank you all for coming and sharing in this special and historic occasion. Let the celebrations begin!”

“Before I announce the winner of the inaugural Stella Prize, it seems fitting on a night like this to pay tribute to four women in particular whose work from the 1970s onwards helped to enable and develop the depth of talent that we now see in Australian women’s writing. Those four women are Hilary McPhee, the late Diana Gribble, Drusilla Modjeska, and Helen Garner.

Hilary and Di established a publishing house in the 1970s that was open to new writing by women, though not only to women, and they guided and mentored their authors. They weren’t only publishers: they were also pioneers, and enablers, and role models. And two of their biggest success stories were Helen and Drusilla.

From the very beginning of their writing careers, Helen and Drusilla have been crossing boundaries, breaking models, and crashing through ceilings in the subjects they chose to write about and the ways they chose to write about them. They have been writing in hybrid genres and experimental forms, finding new ways of saying things that hadn’t been said by writers before, and showing the rest of us what was possible.

It’s largely down to these four women – to the opportunities and the examples that they have provided – that we now have the breadth and depth of talent in women’s writing that resulted in almost 200 entries for the prize, and you can see the best of that in the shortlist tonight.

It was Helen, in fact, early in the process of establishing the prize, who first suggested that we should expand the field to make it a prize not just for novels but for a much broader range of genres and forms. So the longlist of twelve books includes three non-fiction books that all defied generic classification, and the shortlist of six includes a collection of short stories, a fantasy novel for a crossover readership, and verse novel set in an imagined future.

The judging process proved, as I’m sure so many similar processes have proved in the past, that it’s absolutely crucial to have an odd number of judges on any given panel. We all had surprisingly different views, but every book on the shortlist was a genuine contender for the award. They all met the three criteria that we had been given for the prize: they are all original, excellent and engaging.

The book that we have chosen as the winner of the inaugural Stella Prize is all of those things and more; its long list of virtues includes its beautiful writing, its humour, its meticulous craftsmanship, its inventive structure, and its broad and generous world view. I’m proud and privileged to announce that that the winner of the inaugural Stella Prize for literature is Carrie Tiffany, for Mateship with Birds.”

“What an astonishingly lovely thing it is to accept this award. The first thing I need to do is to ask the women of the longlist and the shortlist to come forward and stand with me so we can celebrate this together.

The Stella Prize is important because it celebrates the work of Australian women writers. When I sit down to write there is an anchor that keeps me in place. The anchor is the weight of all of the books that I’ve read: the Barbara Baynton, Miles Franklin, Henry Handel Richardson, Ada Cambridge, Ruth Park, Eve Langley, Marjorie Barnard, Eleanor Dark, Christina Stead, Katharine Susannah Pritchard, Elizabeth Harrower, Judith Wright, Thea Astley, Elizabeth Jolley, Jessica Anderson, Shirley Hazzard, Beverley Farmer, Joan London, Alexis Wright, Gillian Mears, Drusilla Modjeska, Helen Garner and Kate Grenville. There are many, many more.

The Stella Prize is important because it helps to redress the imbalance of attention given to the writing of male and female authors. The figures speak for themselves.

I think the Stella Prize is also important because of the times we live in. To write – to take the work of reading and writing seriously you must spend a great deal of time alone in a room. You must take yourself away from being looked at, yet the pressure for women, young women particularly, to be constantly available for sexualised visual consumption – preened, styled, exercised, tanned, toxically enhanced – has never been greater. For women to spend time alone in a room, to look rather than be looked at, means rejecting some of this pressure. It means doing something with your mind rather than your body. I hope the Stella Prize can demonstrate to young women that this too has its rewards.

The Stella Prize is important because it gives Stella Maria Sarah Miles Franklin her name back. Her real name. The name she felt she couldn’t publish under as it would reveal her gender.

The longlist of this prize opened up new reading for me – a slug of wonderful writing in all its guises and some of them by names new to me. The shortlist was more familiar. I have read and admired everything that Lisa, Margo, Cate and Michelle have published, and it brought me the wonderful new voice of Courtney.

And there are some very acute personal associations for me. In 2003 after my first novel, Everyman’s Rules for Scientific Living was rejected by every major Australian publisher I entered it into the Victorian Premier’s Unpublished Manuscript Award. I heard later that there was one judge – a woman writer that I greatly admire who literally beat the other judges into submission until they agreed my manuscript would win. It was only after that win that the book was published. That judge was Cate Kennedy.

When the book was published I asked a dear friend, a woman writer I admire immensely, to launch it. She told me she would only do so if she liked the book – which is exactly the right response. She read the book. She agreed. When my life is going bung, I return to the words she spoke at that launch and warm myself with them. That woman was Michelle de Kretser.

The Stella Prize, as it has already demonstrated in its openness and flexibility, is an opportunity to do things differently. It can be a way of celebrating the many rather than the one. In that spirit I have returned $10,000 of the prize to be distributed among the shortlist. It should be more – I wish it could be more, but I have some serious creditors at the moment and I don’t think I’m going to be able to keep this prize a secret. I hope that the Stella Prize will be able to find funds in future years to honour the shortlist in this way. I know they support me in this decision. I have to say this is selfish too. When you give writers money you are actually giving them time. And, quite frankly, if I can hasten the next books of these fine writers a little – well, why wouldn’t I?

We must now all give thanks to the remarkable group of people who have created the Stella Prize. The administrators, the board, the ambassadors, the judges, the remarkably generous list of prize donors. They must be exhausted. In only a few short years after they first started discussing the position of women in Australian literary culture they have made something beautiful. Thank you.

And a few personal thanks. My wonderful agent, Jenny Darling, can’t be here tonight as she’s at the London Book Fair. It took me a long time to write this extremely little book. Knowing something of my nature she advised me not to take an advance contract for it, and in all the time I was writing it, or despondently not writing it, she never once asked me where it was. To Rod Morrison for his faith in the book when he bought it for Picador and to Alex Craig who graciously went on to publish it. And, lastly, thank you to Tess and Guy. I hope you are proud of me, because that’s how I feel about you, every day.”